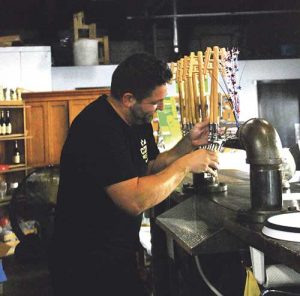 by Jane Primerano
In Hackettstown, NJ, restaurants have opened up over the past few years but the talk of the town has been the presence of craft breweries.
Czig Meister just celebrated its first anniversary. Located on Valentine Street, the craft brewery occupies the former service bays of a long-time Ford dealership.
Owner Matt Czigler gave the brewery his longtime nickname. “I was always Czig,” he said, “and when I started home brewing, my friends started calling me Czig Meister.
Czigler grew up in Jefferson Township, NJ, and went to the University of Maine to study microbiology, biochemistry and molecular and cellular biology. He got a job after college but by then had started home brewing as a hobby and soon he knew what he wanted to do.
So, he went back to school to the Siebel Institute in Chicago and its sister school in Munich which makes up the World Brewing Academy. Studying beer with people who spent eight years or so doing research on why some bottles “gush” when they are opened or how to create the perfect head is an experience unique to Germany.
“Beer is very important there,” he said.
Czigler worked for a year in Lake George, NY at the Adirondack Pub and Brew and lived with his grandparents to save money. Because his parents had bought a horse farm in Blairstown, NJ, he came back to New Jersey and leased the building that became Czig Meister.
“People come in and say they remember their car on a lift over there,” he said, pointing to a corner of the building.
Transformation from a repair garage to a brewery and tasting room was a family project. They scraped paint off the interior brick and built the base of the huge bar.
“Recognize the bricks?” Czigler asked, pointing to the base of the bar. He explained the bar is made of brick from the former Bergen Tool factory across Main Street that closed and was torn down to make way for a pharmacy. Townies and former Bergen employees appreciate the little reminder of Hackettstown’s industrial past.
The custom-made bar top was built for Czigler to match the bar base. Furniture behind the bar that holds glassware and growlers was discovered by Czigler’s mother, Laura, at the Habitat for Humanity Store in nearby Washington Township, flea markets and thrift shops. “She enjoys the hunt,” he said.
His grandmother made the huge banners that hang between the large windows. His grandfather crafted a stained-glass sign over the bar.
Shortly after the anniversary “we hit 200 styles,” he said. “We always have something new.”
On a hot Friday afternoon the tasting room and beer garden were already filling up. Chance, a lab/pit bull mix was enjoying the cool concrete floor. She is Czig Meisters honorary mascot. Czigler allows well-behaved dogs and children to accompany customers.
Kristen Stout jokes that she has the perfect name for an event planner at a brewery. She also handles public relations, social media and “organizes things — odds and ends.”
Stout left Hackettstown right after graduating high school. She moved around, including a stint in Australia, but ended up working at a boutique hotel in Philadelphia. “I’m not a city girl,” she said. She happened to know someone who belonged to the same homebrew club as Czigler and he told her about the new venture.
Czigler was looking for someone in sales when Stout came back to town and sales is not her field. She ended up getting another job but working at Czig Meister whenever she could until Czigler hired her on.
He has set up two brewing systems. One is a 15 barrel, the other 20.
In the smaller system, he brews batches of the forge brews that he features for a short period of time, such as the Hops Fest in August each year or February’s stout Fest. The forge brews are sold half as samples and half in pints. For Independence Day Weekend, he created a flight of variations on his Falconer’s brew.
Trying beers in a flight is popular, Czigler said. When customer find a favorite, they may buy a growler to take home. Czig Meisters provides 32 and 64 ounce growlers for refill and sells some varieties all year in cans.
Czigler and Stout say Hackettstown is a perfect location.
“A lot of people use it as a destination,” Czigler said. Others come to town for shopping or other reasons and stop by. He said the presence of Centenary University, M&M/Mars and Hackettstown Medical Center is a boon to a business where people can meet and talk.
Czig Meister has a good relationship with the restaurants in town, Czigler said. He said people either get a meal to takeout and bring it to the brew pub or, in some cases, the restaurant will deliver an order.
Because the pub is on the border of a residential zone, closing time is at 10 p.m. Stout said their Italian bartender starts playing Italian music and mopping the floors to remind customers they need to leave at 10.
Czigler is on the board of the Hackettstown Business Improvement District and involved in planning townwide events. He is also a member of the Mt. Olive Area Chamber of Commerce and says networking has been beneficial to his business.
They also cooperate with local farmer Tom Kucharski who picks up spent grain for animal feed and brings them pumpkins, straw bales and cornstalks for Oktoberfest. Stout is now drying the spent grain to make animal treats, she said.