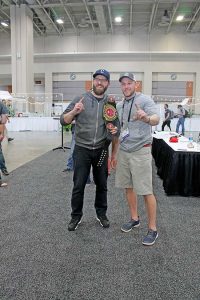 by Sally Colby
Enthusiastic brewers and industry professionals gathered recently in Washington, D.C. for the annual Craft Brewers Conference and BrewExpo America hosted by the Brewers Association (BA). The event is the largest brewing conference in the United States and drew over 13,000 attendees.
BrewExpo America included more than 800 vendors serving breweries, brewpubs and wholesalers. Day one pre-conference events included tours, Safety Bootcamp, TTB Bootcamp and Lab-in-a-Fishbowl.
Beer sampling stations throughout the trade show floor allowed attendees to sample a wide variety of beers from around the nation. There was ample space and some seating areas which invited casual conversation and sharing of thoughts and ideas. A bookstore offered the latest in beer technology and culture, and authors were on hand to sign books.
Once the conference officially opened, attendees could select industry related seminar sessions from a schedule of more than 70 on a variety of topics aimed at helping breweries improve every aspect of their business.
Seminar tracks included brewery operations, brewpubs (managing and marketing), export development, government affairs, packaging breweries (managing and marketing), quality, safety, selling craft beer, startups, sustainability and technical brewing. A mobile app developed for the conference made it easy for attendees to keep track of where they wanted to go and what they wanted to see, which proved to be useful considering the sheer size of the conference venue, number of seminars and numerous expo halls.
The opening general session featured Allison Levine, a mountain climber, author and leadership consultant who shared her experience as the team captain of the first American Women’s Everest Expedition. Levine related her experience trekking in one of the most extreme environments on the planet to working in challenging business conditions. Several of Levine’s points included the fact “fear is ok (normal); it’s complacency that can kill you” and “don’t give everything you’ve got to the summit.”
The second general session was the State of The Industry, which was a lively tag-team presentation by BA Director Paul Gatza and BA Chief Economist Bart Watson. The pair provided current information about the state of the industry and an economic outlook for the future.
Gatza expressed hope the craft beer industry can continue to experience growth and said there’s still a strong consumer desire to purchase locally made craft beer. “Beer is taken personally,” he said. “Craft nails the ‘something new’ category for people. We are here to serve the beer drinker and they want something new and different.” Gatza reminded attendees beer is fun and the trend toward connecting beer and food is growing.
Gatza also mentioned craft beer is underdeveloped when it comes to women and minorities and asked for sensitivity when it comes to labeling. “We need to stay away from offensive names and labels,” he said, which the crowd responded to enthusiastically. “It turns people off.”
Chief Economist Bart Watson talked about the craft beer industry in 2016 and said although craft brewing has slowed, there’s still growth in the industry. “Growth is at six percent,” he said. “If we think about this in the context of the total U.S. economy, six percent is pretty darned good.” Watson says the overall beer market was flat; with non-craft domestic brewers down by two percent last year. He also noted although small breweries continue to grow, perhaps it’s time to rein in expansions. “Beer drinkers do support small and independent and they show it with their dollars,” he said.
In his keynote address, industry veteran and past BA quality ambassador Dick Cantwell marveled at the growth of the craft industry, and noted “we all belong to the same tribe. No matter what sector of the industry we identify with — sour, farmhouse, two hours from the nearest paved road in the middle of Vermont or Wisconsin — as independent craft brewers, we have a common brand and legacy to protect. Those little new brewers are part of that, and those of us older and more established are too.”
Cantwell talked about the wide variety of breweries in the nation, how the industry developed and how each brewery is important to the industry. “Given the lack of scholarship and previous creative precedence, it’s a miracle that in those early days we were actually able to make beer,” he said. “The origin of much of brewing procedure, when it comes down to it, is a series of experimental variations on half-understood themes; hence the enzymatic back-flips. It’s easy to point at crazy combinations of fruit or herbs and wood and bacteria and say that this is the golden age of brewing innovation, and perhaps it is. But the first coffee beers, the first really hoppy IPAs, even the first American wheat beers were innovations.”
Although Cantwell didn’t dwell on statistics, he pointed out the fact 50 percent of the breweries in any given state have opened within the past three years and no matter which side (short or long term brewer) anyone is on, there’s a developing difference of perspective between larger, more established members of the craft beer movement and smaller, less seasoned newcomers. “Among our generally cooperative, convivial and collaborative spirit, I call this the elephant in the brew house,” he said. “It’s inevitable that the sensibilities of one generation will inspire the anti-reaction of the next. That’s where the opportunity lies.”
The 2018 Craft Brewers conference will be held April 30 to May 3 in Nashville, TN.