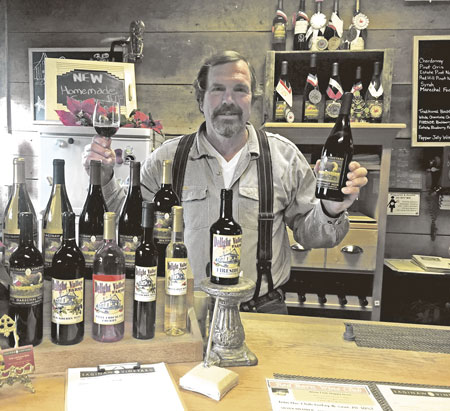 Scott Byler is the owner of Delight Valley Farms and Saginaw Vineyards, which he runs with his family. The farm is located in Saginaw, right off the I-5 exit.
Photo by Aliya Hall

SAGINAW, OR – In the age of corporate farming, Scott Byler said Delight Valley Farms is one example of how a small family farm can still be profitable. The farm has a total of 36.5 acres, and from U-pick berries and raising lambs to establishing a winery, Byler has his hands in almost everything.

“The trick of the whole thing, with the angle of making it as a small family farm, is retail,” he said. “I never thought of us that way, but we are. We take everything from the ground to retail, and we don’t have to give a cut to anyone else. [It] gives me the chance to have a smaller farm and make a living.”

One of Byler’s earliest memories was working out in the garden with his mother, a master gardener in Texas, when he was four years old. He said he remembers the smell of the tomatoes and selling vegetables to neighbors.

“Through her, I have always enjoyed growing,” he said.

With the gardening connection he had with his mother, Byler said he always had a garden and would can his own food; from there, it wasn’t a big stretch to fermenting.

“Fermentation is another way of canning,” he explained.

When Byler first bought the land in 1991, his original plan was to grow and sell wine grapes wholesale to wineries. However, with only 23 acres dedicated to grapes, he found it wasn’t enough land to do only that. He added retailing grapes to around 35 home winemakers and started making his own wine. Now Saginaw Vineyards has a tasting room for guests to enjoy the wine, which he runs with his wife, Karen.

“The wine industry is supportive of each other,” he said. “I talked to other vineyard owners and winemakers, and people gave advice. There was a lot of trial and error.”

Before the commercial winery, Byler’s first wines were made from fig and peach. He continues to experiment with fruits, creating blackberry, blueberry and Marionberry wine, along with the traditional grape.

The fruits aren’t just used in wines. Delight Valley Farms sells U-pick berries, and the tasting room retails jam made from the fruit.

“That’s where you’re going to get your money,” Byler said about value-added products. “If you’re going to sell carrots, you’re going to have to sell a lot and have a big farm. That’s hard to do unless you’re born into it. If I can take those same carrots and turn them into soup, now I have a product that’s worth ten times more what it was.”

He said the important thing to keep in mind with pursing value-added products is making sure the process to do that isn’t at a loss.

“I think it’s true for any small business,” he said.

Delight Valley Farms’ whole operation works as a value-added experience. Right off I-5 in Southern Lane County, Byler planned his position to help his marketing appeal. A sign advertising complimentary tastings sits in his field next to the highway, and every Friday Saginaw Vineyard has its Friday Night Live, as well as events for wine club members.

“The experience of coming out to farms and what we have going on, that adds value right there,” he said. “You have to be able to market. Anyone can grow grapes; the trick is can you sell it?”

He added that because he wasn’t born into the industry, it can be hit or miss for beginners to start their own farm – that’s why it took him 30 years to get to where he is, he said.

“It’s been rewarding to see it succeed,” Byler said. “It’s kind of a weird answer, but after 30 years, it’s there and it works. The next generation can take it on, and the next generation will take it on. It’s cool to create something that is a working business.”

Originally, Byler had his hands on all aspects, but in the future he expects to work at the farm less and have his wife’s son Jackson “fill his shoes.” He tells people he’s semi-retired because he only does a 40-hour work week.

Outside of making a living, he said his focus is on the actual farming. He has less interest in the people and finds the winemaking to be straightforward, but it’s “being out there with the grapes and growing stuff.”