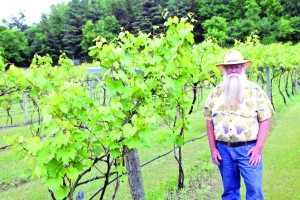 by Bill and Mary Weaver
John Falconer, owner of Falconer’s Winery and Vineyard in Red Wing, MN, has a low-key style that belies his considerable accomplishments as a marketer, a wine maker and a wine grape grower.
Specializing in cold-hardy wine grapes, those released from the University of Minnesota’s breeding program and some from the breeding work of Elmer Swenson, he has brought home medals in every wine competition he has entered.
His Frontenac Port 2005 won a gold medal in the Indiana International Wine Competition only three years after he’d opened his winery. That competition attracted more than 3,800 wines from 17 countries. In 2009, he won the Governor’s Cup, the grand prize in the first-ever Cold Climate International Competition, specifically for wines made from cold-hardy grapes, again with his Frontenac Port. He won the gold again with a white wine made from an Elmer Swenson variety, Prairie Star, at the Minnesota State Fair.
Falconer keeps his number of wine varieties at about 21, dropping old ones when he adds new ones, and aims to produce about 4,000 gallons, or about 20,000 bottles of wine a year. About 5 percent of Falconer’s wines go restaurants and wine shops in area cities in Minnesota. The rest is easily sold at his popular winery. “We sell out every year,” he added.
Falconer’s marketing plan, in addition to serving award-winning wines, also revolves around the winery’s beautiful location, with a large deck where wine and wood-fired pizza are served, overlooking 6.5 acres of carefully tended vineyards surrounded by woods and Mississippi River bluffs. The ambience attracts customers looking for a place to hold special events.
Falconer is best known for his Frontenac ports, made from the red Frontenac grapes that were the first release from the University of Minnesota’s breeding program. “Our ports are different from anyone else’s,” he commented. “We make them by a different process that I figured out myself. That’s why we have been so successful with them. Ours have a lot more flavor than traditional ports.”
Falconer’s vineyard also contains two other University of Minnesota releases: La Crescent, and Frontenac Gris. The latter was found as a sport of a single bud at the Horticulture Research Center of the University of Minnesota. Frontenac Gris produces a golden yellow wine, and the vines have the cold hardiness, disease resistance and good production of the original Frontenac release.
A further Frontenac sport, Frontenac Blanc, has not found a place in Falconer’s vineyard. I think the Gris makes a better wine than the Blanc,” he commented. He has, however, invested in the newest University of Minnesota release, Marquette.
Marquette is different from previous University of Minnesota releases in that its heritage is 20 percent pinot noir, which gives it considerably higher tannin levels. “The University of Minnesota has been trying to breed tannins into their wine grape releases, both for the mouth-feel of astringency, and because the tannins keep the wine from oxidizing, helping it to preserve itself.”
“Marechal Foch, a foreign-bred but cold-hardy grape, has zero tannins,” he continued. “Most of the northern grapes had low tannins before Marquette. To age a wine, you need both the oak tannins, and the natural tannins from the grape itself.”
The University of Minnesota cold-hardy wine grape releases coincided with the explosion in the northern wine industry, centered along the banks of the upper Mississippi. “We were the 13th winery to open in Minnesota. There are 46 wineries open now, with another 20 licenses out there. The area wine industry needs more suppliers of these grapes,” he added.
Falconer is a rarity among prize-winning winemakers in that he has never taken formal enology courses. In the years until they can harvest sizeable quantities of Marquette, he, his wife, and their children have been experimenting with Marquette’s characteristics. Falconer has an excellent sixth sense for what he wants. For example, many wine grape growers do elaborate tests on their grapes to determine when to harvest. Falconer does test pH periodically, and eventually brix. But in his view, the most important test is “the taste experience of the winemaker.” “I’m looking for a certain flavor profile, and when it’s there, I know it, and we begin harvesting that variety,” he explained.
This year the winter pruning ran behind, after two terribly destructive winters, and a wet, cold spring that kept workers out of the vineyard. “It wasn’t that the vines lacked cold-hardiness for the low temperatures last winter,” he explained, “although it was the worst winter since 1936, according to the Weather Service. The problem was the lack of adequately low temperatures in late fall to produce acclimation before the first bitterly cold snap hit.
“In early December, highs were still running 55 degrees, and the buds were actually swelling a bit with the unaccustomed late warmth, like they were waking up in the spring. Then within 24 hours, our vineyards went from 55 degrees to minus 22 degrees Fahrenheit.
“Because the buds had not had time to gradually acclimate to more severe temperatures, but were plunged into them in only 24 hours, we had 58 to 70 percent bud damage.
“The U of MN varieties came through pretty well, but the varieties bred by Elmer Swenson, such as ‘Prairie Star,’ were very hard hit. All the ‘Prairie Star’ vines lived, but we’ll have to start from the ground again, put tubes on them and in a couple of years when the vines grow out, we can tie them up and cut out the old trunks. The Swenson varieties needed one more round of cold-hardy breeding to make them sufficiently hardy for this area.”
The Vineyard and Winery are a second career for Falconer, who decided to plant the first acre of his vineyard only three weeks after he’d retired from 27 years in the pottery business. “I wasn’t ready to retire,” he said simply. Few retirement second careers are so successful.