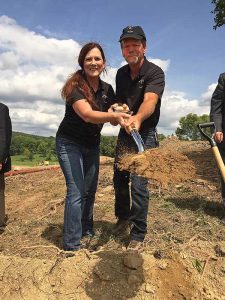 Project will bring jobs, tax revenue, and tourism benefits
MONROE COUNTY, PA – Showers of sparkling wine fell over Linda and Randy Rice as they celebrated during the groundbreaking ceremony for their new winery in Hamilton Township and their 27th wedding anniversary.
The couple sprayed each other with bottles of their locally made bubbly to cap off a ceremony that many people never believed would happen. “We believe that God gave us a vision that was guaranteed to fail unless we had His help so He could prove what faith can accomplish,” said Linda.
Linda and Randy left their jobs to turn their home into a winery. Linda had a six figure job in pharmaceutical sales. Randy was a teacher. Many people told them a home-based winery couldn’t be successful. However, the Rice’s strong faith led them to believe otherwise.
About 10 years ago, the couple turned the mountainside behind their home into a vineyard. At first, they made wine for family and friends. Eventually they became so popular that they turned the lower level of their home into a wine tasting room. They later added a distillery. Before long, the business became a hot spot but it came at a cost. “Some locals have told us they no longer visit us on weekends because the place is too crowded with tourists. The new place will have enough room for everyone,” said Linda.
The expansion will draw more guests, which will increase tax revenue in the area. It will also draw customers to other Pocono businesses. “We see that when a new business does well, others in the area also benefit,” noted Carl Wilgus of the Pocono Mountains Visitors Bureau.
Mountain View Vineyard, Winery & Distillery is also expanding its staff for the project. Within the next year, the owners plan to add at least a dozen new jobs. Within the next three years, they expect to add at least three dozen more jobs. “We have already added several new staff members to get this project moving. We have also created a lot of work for our local builders with dozens of construction jobs on this project,” said Linda.
Many local leaders congratulated the Rices during the groundbreaking event. State Senator Mario Scavello, State Representative Rosemary Brown, Pocono Mountains Economic Development Corporation Director Chuck Leonard, and Greater Pocono Chamber of Commerce Director Robert Phillips all spoke. The senior pastor of Community Church, David Crosby, led the group in prayer.
The new winery building will open next spring. It’s four times as large as the current space and will be the perfect venue for special events like weddings, showers, and rehearsal dinners. The Rices have already started taking reservations.
The building, like all of their farming efforts, will operate sustainably. It will have geothermal power, optimal insulation and LED lighting. “We want to protect the beautiful creation that God gave us,” said Randy.
The new winery is scheduled to open next spring.