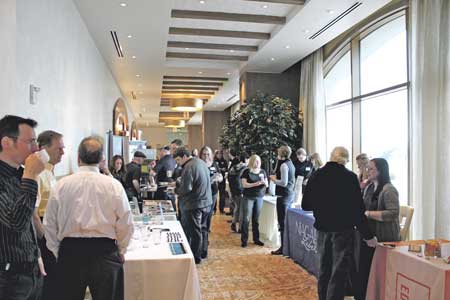 by Michael Wren
WATERLOO, NY — Tuesday, March 27 marked the start of the sixth annual Finger Lakes Craft Beverage Conference in Seneca County, NY, put on by Cornell Cooperative Extension of Seneca County. This year the location changed to the Del Lago Resort and Casino in Waterloo. Day one of the two day event included a tradeshow and informative conferences on the industry.
The Finger Lakes Craft Beverage Conference was originally started as a way to help businesses start their path into the craft beverage industry. Now it includes sessions directed toward furthering the progress of those already established.
The second day consisted of field trips to either the Fleur De Lis Brew Works in Seneca Falls or to the Red Jacket Orchard’s tree nursery and juicing operation and The Cider Lab, both located in Geneva.
Over 100 people came to the conference and tradeshow to further their understanding of the industry and learn more on the future of craft beverages in New York.
The first day of the event consisted of two tracks for those focused on either breweries or cideries with some of the sessions offering information for both groups. The beer track included speakers such as Paul Leone, of the New York State Brewers Association, who spoke on what is currently at work in the New York craft beer market as well as what to expect in the future. Leone brought to light some interesting points concerning New York State craft beer consumers stating that New York now has more breweries than ever before and the industry is still strong. Leone also spoke of the difference in gender and age of various cities across New York and that each area should know the market they are serving.
Michael Weber of the Alcohol and Tobacco Tax and Trade Bureau gave insight to the malt beverage product labeling approval process, and Rich Michaels of the F.X. Matt Brewing Company spoke on the importance of quality control for craft brewers, shedding light on the need to monitor the beer for pH, gravity, yeast count, oxygen and many other aspects, as well as the tools used to do such testing. Michaels also noted that you should “always taste your beer before packaging. Sometimes even when the numbers line up the taste could still be off.”
The day ended with a tasting room experience panel discussion led by Mike Darling (Crafty Ales and Lagers), Joe Mansfield (War Horse Brewery) and Victor Pultinas (Lake Drum Brewing).
The conference provided information for everybody at any stage in the craft brewing industry, whether it be ideas for starting out or techniques and equipment for those already established in the market. Next year make plans to attend the seventh annual The Finger Lakes Craft Beverage Conference.