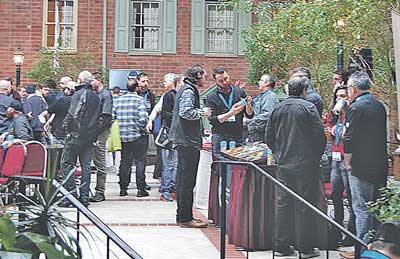 by Christopher Wren
ALBANY, NY — Despite a snowstorm that hit upstate New York over 300 brewers from all over New York State gathered in Albany for the first annual New York State Brewers Association (NYSBA) Craft Brewers Conference March 1-3. This conference allowed many of the brewers from across the state come together to discuss this rapid growth, and what may be in store for the future of craft brewing. On the final day of the conference the Annual NYSBA Meeting was held, along with the NYS Craft Brewers Festival.
The Keynote speakers for the event featured: The Brewers Association Chief Economist, Bart Watson; Christopher Shepard of Craft Brew News; and the Brewers Association Quality Ambassador, Neil Witte. The conference also included informative sessions in which brewers could attend panels and discussions with topics ranging from increasing profitability in the taproom to keeping yeast happy. The panels were comprised mainly of brewers, but also researchers and others in the industry.
Also offered was an off flavors class where participants could learn more about off flavors and how to detect them. Topics regarding legal updates, trademarks and distribution were an important part of the event as New York State undergoes an expansive growth in the craft beer industry. During breaks from the educational sessions, attendees could visit the sold-out exhibit hall and meet with vendors and other businesses within the industry.
For more information visit https://newyorkcraftbeer.com.