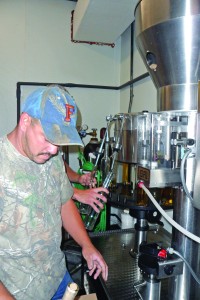 by Sally Colby
Beach lovers who stop in at SeaBreeze Winery in Panama City, FL, sometimes find it hard to believe that they’re visiting a true, local winery because the establishment downtown, right in the middle of a tourist destination. But the wine produced at SeaBreeze is genuinely their own, the product of grapes that are grown at their own vineyard.
Lynn Webb and her family started winemaking like many others do — as home winemakers. “We started out making wine at home with a kit,” said Lynn. “We got involved with the Florida Grape Growers Association and another winery, then we started contract growing for Lake Ridge Winery.”

SeaBreeze’s Kyotee vineyards, located 35 miles northwest of Panama City Beach, is on ground that isn’t typical grape-growing soil. “It’s pure sand, and it’s flat and wet,” said Lynn, adding that an underground drainage system was installed to remove water from a particularly wet area.
Although the Webbs tried a small planting of hybrids, it was clear that they wouldn’t thrive in beach sand. In 2000, the family put in 20 acres of muscadine cultivars including Noble, Carlos, Magnolia and Welder. They had help planting, but Lynn trained the vines herself the first year. The following year, the Webbs planted 30 additional acres. “The second year, I realized I couldn’t do it myself so we got help and I stepped back,” said Lynn. “That’s when we decided we needed to open a winery.”
The vineyard now includes 100 acres of vines, and is the largest single vineyard in the state. Grapes are trained to a single wire and watched carefully for signs of disease, which can be particularly challenging in the Florida climate. Like other grape growers, the Webbs find the main disease challenge is mildew and other rot problems. Lynn says they’ve received expert advice in growing wine grapes from the University of Florida and The Center for Viticulture and Small Fruit Research at Florida A&M.
Some years, the Webbs can count on dry weather leading up to harvest, but Lynn says in some years, the level of moisture throughout the summer is especially challenging. Last year, the drainage system wasn’t enough to remove water from a particularly wet portion of the vineyard. “We lost five acres of grapes, and the entire state was a week later harvesting last year,” she said. “This year, we’ve had so much rain so we don’t know what harvest will be like.”
At peak ripeness, which is usually around Labor Day, mechanical harvesters work around the clock to move grapes to bins, which are then transported to the winery. SeaBreeze Winery uses about 25 percent of the grapes for their own wines, and the rest are sold to other wineries.
Lynn says doing research on what other wineries were offering helped them narrow down the kinds of wine they were going to produce. “We wanted reds, whites and a blush,” said Lynn as she described the first selections offered at SeaBreeze. “We also threw in a few fruit wines.”
When they decided to establish a winery, which opened in July of 2003, the Webbs knew it wouldn’t do well at the same location as the vineyard because it was too far from any other attractions. Because Florida has no specific wine regions, the state’s wineries are spread out. Without a wine trail, SeaBreeze relies on its beach location, tourists and faithful local customers. All of the pressing, fermenting and bottling is done at the Panama City Beach winery, and interested visitors can tour the facilities. “Some people are interested in seeing the winery, and some aren’t,” said Lynn. “They can taste all 12 wines free of charge. They can taste just a few or all of them.”
Although business varies somewhat according to season, SeaBreeze’s tasting room is usually busy. The winery experiences a lull during late winter, but starts picking up activity in spring. Lynn says October through the end of the year is their busiest time. The winery includes a well-stocked gift shop that draws many customers who are looking for unique gifts or as décor for their own beach home.
Like other winery owners who are active in their winery’s tasting room, Lynn has seen an upsurge in young, new wine drinkers. “They want to learn about wine,” she said. “But some new wine drinkers are intimidated by the process of sniffing and swirling. We try to leave them alone and let them enjoy it. The worst thing is if they have a friend with them who is a dry wine drinker — the new wine drinker tries something they like but thinks that they aren’t supposed to like it. “I can see the look on their face — they’re thinking ‘I’m not supposed to like this’.”
SeaBreeze’s consistently biggest seller since the time they opened a sweet red wine. “I tell everyone that that’s what pays the bills here,” said Lynn. For experienced wine drinkers who may not think that sweet red wine is a good choice, Lynn explains while new wine drinkers may sample a dry, oaked Chardonnay, it isn’t what suits their taste. “They aren’t going to like it, so we give them something that they’re going to like,” she said. “I tell them to throw the so-called ‘wine rules’ out the window. If they want to put ice in it to make it colder, I tell them to put ice in it. Just enjoy it — then they will graduate to other wines.”
Lynn says some visitors to the winery ask a lot of questions about wine and the wine-making process, others don’t. “It really depends on where they’re from,” she said. “If they’re from the south, they grew up with muscadine,” she said. “Those from the north may not have even heard of muscadine so they’ll ask a lot of questions. But they really want to taste a local wine.”
Visit SeaBreeze Winery on line at www.seabreezewinery.com, or check out their Facebook page for updates on winery events.