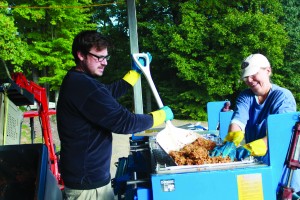 by Karl H. Kazaks
DUGSPUR, VA — “It’s all about ingredients and flavor,” says Diane Flynt, the driving force and co-owner (along with her husband Chuck) of Foggy Ridge Cider. “We pick like grape growers,” she says, harvesting when the apples are ripe. That means multiple passes through the orchards, an expensive process but one which ensures Foggy Ridge cider is made with the best possible fruit.
Foggy Ridge uses over thirty apple varieties, including a number of classic English and French apples as well as heirloom American apples. “Diane is a true preservationist,” when it comes to heirloom American apples, said the renowned chef Sean Brock, who showcases Foggy Ridge ciders at his restaurants in Charleston, South Carolina, and Nashville. “I don’t know anyone who knows as much about apples or cares as much.”
Foggy Ridge makes four sparkling ciders and two dessert apple ports. Serious Cider is a variation of a classic dry English cider, combining English varieties like Tremlett’s Bitter and Dabinett with the tart American varieties Ashmead’s Kernel and Roxbury Russet. Sweet Stayman is an off-dry blend of Stayman and heirlooms including Grimes Golden and Cox’s Pippin. First Fruit is a blend of early American heirloom varieties, and Handmade is made from Newton Pippin, which is also the sole ingredient of one of the ports, Pippin Gold, which is fortified with apple brandy from Laird and Company.
The Flynts began planting their orchard in 1998 with stock from Cornell and overseas. Today, their orchard is a source of scion wood for other apple producers across the country. Foggy Ridge first produced cider in 2001, becoming the first Southern cider producer. Today the operation produces over 5,000 cases of cider and distributes to New York, throughout the mid-Atlantic, and in the southeast as far west as Tennessee. Because their cider is a fine artisanal product, it tends to be carried by stores and restaurants that emphasize quality ingredients, such as Chef Brock’s restaurants.
Foggy Ridge’s ciders each have an individual expression and profile, but they share a common trait of multi-layered complexity. Such expressiveness is possible not only because of how the Flynts raise their fruit (they do buy some fruit, but only from growers as finicky as they are), but also thanks to the diversity of varieties at their disposal.
“We strive to express the individuality of each of the varieties,” said Flynt. Cox’s Orange Pippin is a fragrant English variety used in many of Foggy Ridge’s ciders to add aromatics.
Graniwinkle and Harrison are American heirlooms, which blend well together. Harrison was thought lost until a 75-year-old tree was discovered in 1989. Virginia Hewe’s Crab is another of Foggy Ridge’s American heirlooms, one grown in Thomas Jefferson’s orchard. The three heirlooms are the backbone of First Fruit. The French varieties include Muscadet de Berney, a bitter spitter, and Pomme Gris.
The same emphasize on quality found in orchard production extends to the cidery floor. Foggy Ridge uses a Goodnature Squeezebox press. The press schedule extends for months, as the fruit comes in. “Last year we did 35 ferments,” said Flynt. The ripeness of the pressed juice determines how the cider is fermented. Sometimes, up to four different yeasts are used to ferment one batch of cider. The cidery has six 2,200 liter fermentation tanks and two 4,000 liter fermentation tanks. “We have a style we’re shooting fork but expect it to be different every year,” said Flynt. It’s a style that speaks to the origin and quality of the fruit that’s used. According to Chef Brock, Foggy Ridge Cider “is the champagne of the South. This is what this area tastes like, this is the flavor of this area.”