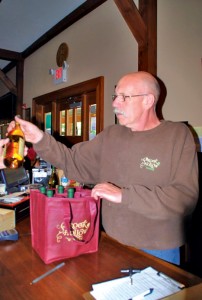 by Jane Primerano
A sunny spring Saturday brings visitors to wineries all around northern New Jersey. Brook Hollow Winery in Columbia had an even better attraction on Saturday, May 23 — puppies. It was the scene of the first ever Road to Rescue pet adoption event not held in a pet store, according to rescue founder, Beth Rimer. She said her son, Andy, a musician who plays at the winery often suggested she hold an adoption event there. Vintner Paul Ritter liked the idea of Pinot and Puppies.
“I help a lot of local non-profits,” Ritter said in between taking care of customers in the tasting room, adding, “It works for both of us.”
Many of the dogs romping on the lawn were of the hound variety. “I’m the beagle lady,” Rimer confessed, laughing. “They are a great family dog, but I’ll take any breed.” She wasn’t planning on becoming involved in rescue until when she read about some puppies about to be put down in Ohio. That inspired her to drive out and rescued seven of them. That was in 2007.
She has 12 foster volunteers. A number of her foster families had dogs at Brook Hollow. Kids and parents were attempting to walk the small, medium and large size dogs or playing Frisbee and other games. Other visitors were talking to the foster parents and getting to know the dogs.
Rimer is quick to admit she has “failed” as a foster parent to dogs six times and many of her foster families also adopted the pets they were supposed to just take temporarily. “I established a relationship with a rescue that gets the dogs vetted and pre-screened,” she said, adding, “Since all my fosters have their own dogs, we can’t take dog-aggressives. A paid transport service brings the dogs for many East Coast shelters to Mechanicsburg, PA. From there, volunteers drive them to pick-up spots for the local rescue. Rimer’s pick-up is in Phillispburg.
While the dogs and families gathered on the lawn, the winery building was busy with tastings and purchases. Ritter said about 50 percent of the people on the premises were there for the rescue. Others were regulars he chatted with as he rang them up. Road to Rescue set up auction tables and was selling raffle tickets and food.
The winery is no stranger to chaos, with music every Friday, Saturday and Sunday night. Open mic night is held every third Friday. “There is out-of-the-park local talent around here,” Ritter said. He said between 150 and 200 people attend each evening. Starting Memorial Day weekend, Brook Hollow has weddings every weekend through the summer season, he said. It is also a venue for bridal showers and other events, including book signings for various local authors.
Lining the walls of the winery are portraits of wolves from the a nearby wolf preserve. Brook Hollow sells them with all of the proceeds going to the Lakota Wolf Preserve and offers two wines, a white German and a hybrid Geneva red with the proceeds going either to Lakota or to the Antler Ridge Wildlife Sanctuary, also located nearby. “We try to help local groups,” Ritter said.
Brook Hollow is a second career for Ritter, a former biologist for the state of New Jersey. His wife, Debbie, helps out when not at work at her IT job and all three daughters have helped. Youngest, Jessica is currently wineries operations manager. Besides employees, friends also help out. “It’s great to have friends and volunteers. When this was a hobby, it was one thing,” Ritter said.
Now, it is a full-time job that starts about 5 a.m. every day. That Saturday, Ritter was out early spraying in the 37°F weather. “Another two degrees lower and we would have lost vines,” he said.
Many patrons were buying glasses for tastings. Return customers can bring their glasses and get the tasting for free. Ritter said when a return customer forgets the glass, he gives them another one. “More than half the hurdle to profitability is being nice to people,” he said. He noted people are often telling him how they are condescended to at other venues. “People leave here happy.”