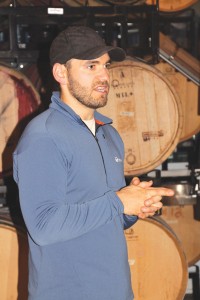 by Bill and Mary Weaver
Four Daughters Vineyard and Winery, in Spring Valley in southeastern Minnesota, pulled off an unexpected publicity coup recently. Their award-winning wines and new hard cider, called Loon Juice, were featured at the Country Music Awards after-party in Nashville in November.
“The Universal Music Group was planning their huge after-awards party, and were looking for unique wines to serve their guests,” explained Justin Osborne, who oversees winemaking and handles marketing and sales for Four Daughters.
“An old friend of the family’s suggested they contact Four Daughters. We needed to have four cases of assorted wines, plus the Loon Juice, to Nashville in just a few days.” The operation easily handled the logistics for its safe arrival. “Hopefully the people who attended the after-party will tweet about it,” he added.
Four Daughters Vineyard and Winery seemed like an improbable enterprise from its inception in 2010. When long-time conventional corn and soybean farmers Gary and Vicky Vogt, the parents of the four daughters for whom the operation is named, started planting their vineyard just after Memorial Day in 2010, the neighbors, also corn and soybean farmers, were stunned.
When the futuristic winery building was completed, the neighbors were even more perplexed. But the four-year-old operation had been carefully researched and planned by the Vogts, and has been run with a steady hand. Demand for their products has been excellent, and money earned has been plowed back into the business, partly to invest in top-quality help. Recent hires include Nick Smith, who was previously employed in the enology program at the University of Minnesota.
“We’re in the process of completing a construction program that will double the size of our building, increasing our space for special events, and expanding our kitchen and winery,” noted Osborne.
The winery received exceptional publicity in 2012, when 22 of Osborne’s 2011 vintage wines were entered in three international competitions and 20 won medals. Osborne was stunned, but the medals showed this Vogt son-in-law’s very real talent for creating excellent wines, and helped make Four Daughters a destination.
Each year, the winery has substantially expanded its output. “Last year in 2013, we produced 26,000 gallons,” Osborne continued, “and last June we signed up with well-respected Minneapolis distributor Johnson Brothers to distribute our products in 15 states.”
“But having a distributor doesn’t means we can stop marketing and selling,” he added, and those jobs have become his and his wife, Kristin’s, primary responsibility.
This year, Four Daughters will have the largest output of any of the 40 or so wineries that have sprung up in Minnesota in recent years, where, with the cold-hardy varieties developed by the University of Minnesota and others, soil and climate conditions near the Mississippi Bluff Country can be excellent for grape growing.
To handle the volume of grapes to be processed and wine to be produced, the operation has had to replace equipment repeatedly as their output has grown.
In addition to the output of their 6-acre vineyard of cold-hardy Minnesota varieties, the operation buys cold-hardy grapes from six other vineyards within a 50-mile radius. “We can be crushing them within hours of picking,” Osborne explained.
For more variety, California grapes and sometimes Washington grapes are also included in Four Daughters wine offerings. “I source the grapes,” commented Osborne. “I always get to know the growers before we buy. I travel to the West Coast and look over the vineyards before participating in the ‘meet and compete’ bidding wars.”
The local cold-hardy grapes also ran into some problems this year. Four Daughters did not have the vine kill and/or vine damage that some vineyards experienced, but their crop, and that of other nearby vineyards, was only about 60 percent of expected, the result of the exceptionally cold 2013 winter. “We had 50-some nights of below zero temperatures, and winter lows of -29° and -30°. Mathematically, the flower buds should have survived. The varieties are bred to take -35°. But our crop was cut.”
Introducing a Brand New Type of Wine
For the 2014 season, Osborne is introducing a type of wine that never existed before: a blend of his award winning California wines, which are produced from low-acid grapes like Muscat and Riesling, with the higher acid wines made from Minnesota cold-hardy grapes. Called Sunflake wines, these will introduce Minnesota cold-hardy wines to a wider audience. Kristin Osborne, marketing director, estimates the new wines are 70-80 percent Minnesota grapes.
The idea of the blends was born in their tasting room, where customers request blends they think might be interesting when they order flights of wine. Tasting room staff noticed the popularity of the California/Minnesota cold-hardy blends and passed the information on to Osborne. The result has been the birth of the bottled Sunflake wines.
Sunflake wines will only be available wholesale, and have already been distributed to liquor stores across the country, with widespread restaurant distribution soon to follow.