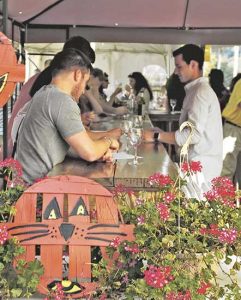 by Jane Primerano
Valerie Tishuk understands multitasking. It’s her job.
Tishuk is the event planner for Four Sisters Winery in White Township, NJ.
Four Sisters evolved from Matarazzo Farms when owner Robert “Matty” Matarazzo was looking for a way to pay to educate his four daughters.
Matarazzo and his wife, Laurie, grew up in Essex County where the Matarazzos had a farm but where houses were replacing crops. The family had cultivated land in Warren County since 1921 and that’s where the couple settled. They raised vegetables, pick-your-own strawberries, peaches, apples, pumpkins — the standard for local farms. Years later they planted grapes and Matty became a winemaker. He did end up paying for the education of Melissa, Serena, Robin and Sadie, their daughters.
He also created fruit wines for each of the sisters: Strawberry Serena, Sadie’s Apple, Robin’s Raspberry and Cherry Melissa.
The winery has become a destination for weddings, private parties and special events. During harvest festival weekends, that may mean several things going on at once.
“I compartmentalize,” Tishuk said with a laugh.
Autumn Harvest Weekends in October feature hayrides to apple and pumpkin picking and lunch in the form of hamburgers and hot dogs. Visitors can also try out the corn maze created by Matty.
The deck between the winery and the main building serves as an outdoor tasting room, Cafe Vino. It overlooks the rolling hills of the 250-acre farm with both shaded and sunny areas with picnic tables. On weekends, special events join the tastings. Friday’s are for fish and chips from 11 a.m. to 5 p.m., Saturdays feature wine and wings with music from noon to 5. On Sundays, the music is during the same hours with barbecue. Music is cancelled when a wedding is scheduled.
Weddings, which can be from 30 to 400 guests, are scheduled about a year in advance, Tishuk confirmed. But the winery is also the scene of around 100 private parties from small family events to corporate soirees.
Three events in one day didn’t seem to disturb any of the staff, which numbers between 10 and 15 depending on how busy the day is. Tishuk said 1,000 people can come through the winery on a day with several events.
With patrons three deep at the outdoor bar, Cody Cannavo had only a brief time to talk.
“I’m not really a bartender,” he said. “I’m the assistant winemaker. This is a great opportunity. I was part-time here then the assistant job opened up. I’m getting more out of it than I would in college.”
After the harvest weekends, the last weekend of October is Hallo Wine Weekend. Anyone wearing a costume receives a free wine glass — children get a Frisbee. Visitors also get a complimentary wine tasting and tour.
Tours are always available on weekends and tastings are free daily.
Two of the most popular regular events are barefoot grape stomping and murder mystery dinners.
The stompings feature spaghetti and meatballs, salad, bread and dessert. Including the stomping and wine tasting, the cost is $35.
Murder mystery dinners are also $35. Dinner is baked ziti and meatballs, salad, bread and dessert. Everyone gets to play a role.
After autumn, the busy season is the month before Christmas. Four Sisters is part of the Christmas in the Country Trail, with two other nearby farms. Mackey’s includes a bakery as well as produce and holiday decorations. Wyckoff’s is famous regionally for its Christmas trees, both pre-cut and cut your own. Customers visit all three farms, spending a minimum of $5 at each and receive two free “Christmas in the Country” wine glasses at the last stop.
“They don’t have to do it all in one day,” Tishuk said of the promotion which runs for a month. Some customers may visit Wyckoff’s early in the season for their Christmas tree and Mackey’s later to buy bakery products for the holiday.
“We give away the most glasses,” she said, so Four Sisters must be the most common last stop.