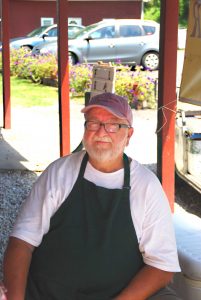 by Jane Primerano
Family Fun Days at Matarazzo Farms in White Township, NJ, used to bring crowds to the farm for children’s games and fresh produce.
When Robert (Matty) Matarazzo added Four Sisters Winery to the farm, he kept the fun days, but when the business shifted entirely to wine making, he wasn’t sure he wanted to continue.
Most of the events at Four Sisters are geared toward adults only – three-times a month grape stomps, murder mystery evenings, the weekly Friday night happy hours. But Fun Day patrons were telling him they loved bringing their children. Parents could enjoy a little wine and the games and fresh air would wear out the kids for a quiet ride home.
So Fun Days continued and on Saturday, July 23, Matarzzo was out in front of the winery grilling hamburgers in the heat.
This year’s Family Fun Days was the first with a new deck off the back of the winery building. The deck had been christened the night before with a small wedding. Weddings at the winery are common, six to eight a year, but had been held in a tent on the spacious back lawn. This small wedding, 42 people, was perfect for the new deck that is also covered with a tent, Matarazzo said.
The shift from farm and winery to winery only provided Matarazzo room for solar panels and extra parking for the big events.
The largest each year is the Beaver Creek Red Festival held the last week in August. Beaver Creek Red is Matarazzo’s best seller, he said.
“It’s like the return of the PowWow,” he said.
The farm held an annual PowWow each year from 1990 to 1999 with as many as 20,000 people.
“We prefer to do smaller events more often,” Matarazzo said. He explained bad weather is not as much of an impact on smaller events.
Besides weddings, Four Sisters is the site of many private parties, especially bridal showers. Ample parking and both inside and outside venues are a significant draw.
White Township is along the Delaware River in Warren County, near the Lehigh Valley in Pennsylvania. Much of the clientele comes from the east, however, Matarazzo said. He said many customers come from as much as 45 minutes east of the winery. Route 80 is only a few miles north of Four Sisters.