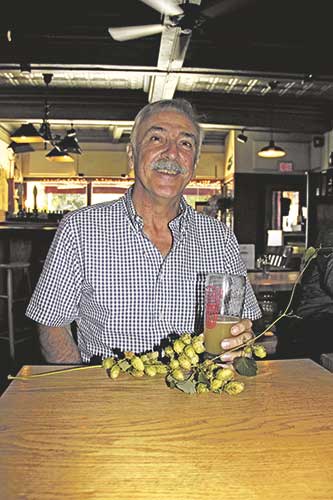 by Laura Rodley
Liz and Nathan L’Etoile hosted their friend’s wedding at their Four Star Farm in Northfield, MA. They also grew the hops for that friend, Chris Sellers. Sellers is the head brewer at People’s Pint in Greenfield, MA who got married at L’Etoile’s farm in August. The beer is called In Love and Happiness.
Sellers was able to pick the hops he wanted from among the 17 acres of fields on Four Star Farm. He chose a lemon, citrusy aroma and flavor, found in the Pepite variety hops. The barley, wheat and rye in the beer was also grown at Four Star Farm and malted by Turner Hill Malting in South Egremont, MA.
The L’Etoiles had a working relationship with Sellers as he chooses the hops that People’s Pint purchases. From that it grew into a friendship. Co-owner of People’s Pint, Alden Booth, the L’Etoiles and Sellers convened at People’s Pint earlier this year during a Massachusetts Farm Bureau Federation (MFBF) farm tour to speak about beer and hops.
Four Star Farms consists of 288 acres, with 100 to 200 growing grain each year. “Some of the grains go in beer, some of them go in baking,” said Nathan L’Etoile.
“Growing hops for a brewery is a whole different animal. We’ve always been interested in what the brewer’s need,” said his wife, Liz.
There are certain points in the development of the hops that determine its flavor and aroma. Western Massachusetts’ climate is especially suited to growing the citrusy flavors as well as other hops.
“When the brewer is making beer, its flavor depends on when the hops are added to the beer,” said Nathan. “You can put hops in at any point during the process to give it different characteristics,” he added.
Hops can still be found growing wild along stone walls on Massachusetts’ properties from when farmers grew hops for their own use in the 1800s.
“A lot of wild hops may be from a hop farm, but each family had one or two hops growing out back,” Liz said.
Four Star Farms employ four to eight seasonal workers in early spring and during harvest. The rest of the time it is four to six year-round workers and two truck drivers who own their own rigs but work out of the farm.
The hops grow on 20 foot trellises. Each bine is cut down and brought to a stationary, 12-foot-high, 20-foot-long and 7-foot-wide hop harvester housed in a large shed. Two to three people feed the bines to a person who feeds them into the harvester which strips the leaves and hops and sorts the leaves from the hops. Another person grades the hops afterward to make sure there’s no foreign matter.
Four Star Farms Inc. was started as a former dairy farm by Nathan’s parents, Bonnie and Gene L’Etoile. A family run business, Liz credits her father-in-law, Gene, as the reason they grow hops in 2008. “He’s the one that had the thought that we should diversify, just as the craft industry started to grow in Massachusetts. Our timing — while it was coincidental — was perfect.” For more information, visit www.fourstarfarms.com.