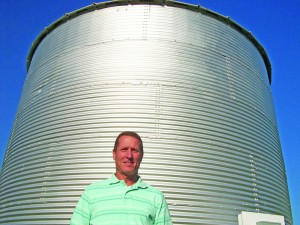 by Daniel Crofts
A fourth generation farmer and a board member of Governor Andrew Cuomo’s Malting Barley Initiative Committee, Hawley is also the owner and operator of New York Craft Malt, which will be producing artisanal malts for micro and craft brewers in New York State and elsewhere. He is working with CY Farms in nearby Byron, NY to grow malting barley and with Harris Farms in Le Roy, NY to install test plots in cooperation with Cornell Cooperative Extension. Once the barley is grown, dried and cleaned, it will go to New York Craft Malt for the malting process.
“It’s a three-step process,” Hawley said. “There’s steeping, which takes about two days. This is where you soak the barley to get the moisture level up to 46 percent. Then comes the four-day process of germinating, which is where you grow the grain. Finally, there is kilning, which is where you stop the germination and dry the grain.
“You’re using almost all of your senses,” he added. “Touch, smell, taste, visual — all of these senses are involved in determining if the process is completed.”
This is a journey that began about two years ago, when Hawley attended a Northeast Organic Farming Association convention in Syracuse. “One of the presenters asked if there were any entrepreneurs there,” he said, “because there was a need for malting grains for the brewing industry.”
The timing was quite good. In November 2012, New York State legislators passed the Farm Brewery Bill, which requires that all ales and lagers labeled ‘New York State’ eventually be made from at least 90 percent locally grown products.
According to an article Hawley had published in the brochure for ‘Buffalo Beer Week 2013,’ the projected needs of the New York State Brewers Association will require 20,000 to 24,000 acres — which is 31 to 38 square miles — of malting barley.
“It all begins with farming,” Hawley said, calling the role of farming “critical.”
Hawley acknowledges that this marks an exciting time for farmers. This new trend is expected to create new jobs in malting as well as at breweries and all throughout the brewing industry.
On the agricultural side, new opportunities and challenges abound. First of all, New York Craft Malt is working with cereal barley, whereas farmers in the Northeast region are used to working with feed-grade.
But that’s only the proverbial tip of the iceberg.
“Farmers have a whole other crop to grow,” he said. “There will be a learning curve. This is not considered a traditional farming enterprise. We’re dealing with a value-added product and the modification of grain to create a new product once the grain is harvested.”
But change is necessary, Hawley believes, in order for farmers to thrive.
“It’s vital for farmers to find new products for quality crop rotation,” he said.
One of Hawley’s biggest challenges is going to be figuring out which types of barley can best be grown in his neck of the woods. The moist climate of the Northeast region can create fungal infections and other diseases, which is why maltsters and growers moved out of New York State 100 years ago and took their operations out west and to Canada.
But Hawley is not backing away from the challenge. He is participating in a study with Cornell Cooperative Extension involving the planting of 23 varieties of spring barley in four locations throughout New York State.
“Research has just started, so they won’t recommend anything yet,” he said. “But I’ve had good luck with ‘Conlon’ (a 90-day spring variety) and ‘Endeavor’ (a winter variety).”
New York Craft Malt has completed the first phase of renovations to its malthouse, and Hawley is confident that it will soon be fully operational and ready to produce three tons of malt weekly (about 156 tons a year, which makes just under 2,000,000 bottles of beer).
“We want to hire for at least two jobs to start with,” he said, “and then double our capacity in short order.”
Such doubling will be necessary to fit consumer demand.
“I have 50 breweries waiting for my product,” Hawley said.
For more information, visit www.newyorkcraftmalt.com