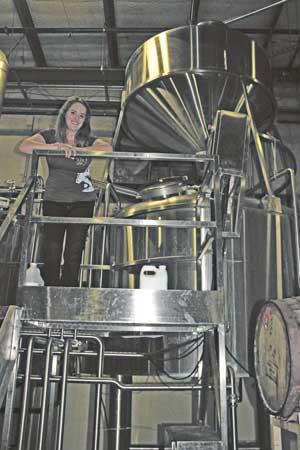 by Laura Rodley
The crew — a dozen strong — at Friends and Allies Brewing has much for which to be grateful. The owners Devon Ponds and Ben Sabin, both Austin, Texas residents, founded the brewery in 2015. Through a lot of hard work, they built a new facility which opened in February 2017. Their tasting room opened up in late April of that year.
In October 2017, the brewing company received the First Time Entrepreneur Award from the Austin Chamber of Commerce, part of Greater Austin Business Awards, honoring their outstanding business growth and for launching a consumer-focused business.
Even though new to their location, they already had a following and became booked immediately for private parties, corporate events, happy hour events and many holiday parties, including a Halloween and New Year’s Eve party with live music. They have a large patio where consumers can enjoy their beer, along with food provided by Ginger Armadillo food trucks and music provided by different local bands.
Their brewery was one of the venues on the famed self-guided East Austin Studio Tour in November, noted Events Coordinator Catherine Lux. This is a tour where different area artists show their work. A muralist, Kimarie Sky, speed painted murals in the back during the viewing tour, and other artists’ work was hung on the walls.
Their head brewer is Nathan Crane. “He and Devon met at Port Brewing Co/Lost Abbey, another brewery in California. They became good friends and moved to Texas,” said Lux. Ponds manages the accounting and Crane manages the brewery. Their tasting room is open seven days a week.
“I like being part of such a small team, so tight-knit. We work well together. There are only twelve of us and it’s nice that we’re working towards building out this vision,” said Lux.
Their offerings have upwardly mobile and upbeat names, featuring a Noisy Cricket IPA made with Mosaic, Simcoe, Amarillo, and Centennial Hops with a flavor of citrus and honey and heady aroma of citrus and toast. They also make a Fresh Coast IPA, Urban Chicken Saison, a Springdale White Ale, and seasonal roasty mocha Stout called Bat Wings, a Rosemary endowed Belgian Pale Ale called Memory Jog, a Belgian flavored with peppercorns and Sorachi Ace Hops called Pep Talk, to a Belgian dark called Dark Ritual and a Belgian Golden with Hibiscus and Mate named Protocol Droid.
The name, Friend and Allies, is derived from a point in history when the Spaniards crossed Texas before it was colonized and when it was inhabited by a collection of Native American tribes called the Hasinai Nation, who would ask travelers if they were friends or allies, noted Lux. The name Texas is derived from that phrase, Ta’sha.
Ever friends of canines, during mid December, the brewery hosted a Happy Howl a Day “Puppy Day” Adoption Donation day to raise money for Austin Pets Alive at their brewery. As their brewery sits nestled adjacent to Austin Bouldering Project, the largest bouldering gym in North American, they joined forces together to host Puppy Day, along with Austin Eastciders.
Also in December, Friends and Allies hosted the 3rd Annual Solar Austin Holiday Party. Immersed in their community, they hosted a Holiday Vendor Market, and are available to host other events that reflect the community’s diverse spirit.
For more information, visit www.friendsandallies.beer.