From its brewpub den, Wild Wolf continues to expand its range 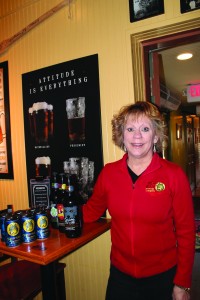 by Karl H. Kazaks
NELLYSFORD, VA – When it became law in 2012, the Virginia legislation known as SB 604 was a boon to craft brewers, allowing them to sell beer for on-premise consumption. Prior to passage of the bill, brewers in the Old Dominion were limited to offering free samples and selling beer to go, unless they also operated an on-site full-service restaurant.
Wild Wolf Brewery, the mother and son operation of Mary and Danny Wolf, opened on the Brew Ridge Trail in the fall of 2011. The Wolfs had long known they wanted to sell their own beers on-site, which meant that when they were planning and building their brewery, they also had to plan and build a restaurant. The farm-to-fork restaurant – which employs over 40 people in addition to the brewery’s three – has grown in step with the brewery. “It’s been amazing,” said Mary.
Last year, Wild Wolf brewed 3,400 barrels. This year, they plan to brew 4,500 barrels, the maximum production from their current setup of their brewery. Distribution is focused on the Virginia and Washington, D.C. markets. They’re also adding a 140-seat event space to go with the restaurant’s existing 300 seats, driven by numerous requests for a space for weddings and other events.
Wild Wolf has been growing from the start. Within a few months after opening the restaurant (housed in a century-old former schoolhouse), bar and brewery, the Wolfs were adding a pavilion, to house the live music they now schedule every weekend – Friday evening, Saturday evening and Sunday afternoon. They also over time added additional fermenters and bright beer tanks.
The Wolfs’ brewery underwent a thorough gestation. After Danny graduated from the Siebel Institute in 2008, the two opened a nanobrewery and homebrew shop elsewhere in Nelson County. “It was a great education for me,” said Mary, who is in charge of marketing, scheduling and much of the business side of the operation. “It helped me develop a good understanding of procurement, and it was a great opportunity for Danny to develop recipes.”
The Wolfs knew they wanted to locate their brewery on the Brew Ridge Trail, an association of closely sited breweries near and outside of Charlottesville, many of them on Route 151, the main road in Nelson County’s Rockfish Valley. “We loved the locals , we’ve developed a really good local following,” Mary said, explaining how she and Danny decided to build the brewery here. “There’s also a good tourist presence here,” with people traveling from out of the state just to experience the Brew Ridge Trail.
They needed to find a level spot with good water and good line of sight, which narrowed down their search. Eventually they chose the former schoolhouse, which for many years had been a landscape and garden center. The mature elms and other landscaping installed during the garden center era now form a pleasant setting for the brewery and its outdoor Biergarten.

Aluminum cans are the signature packaging at Wild Wolf, with about half of their production going into 12-ounce cans. The Wolfs chose aluminum because it minimizes the use of new materials and maximizes the chance of the container being recycled. The Wolfs also market cans as having other advantages to bottles. Cans, by keeping light out and with their airtight seals, can keep beer fresh longer. They get colder faster, and are easier to carry when traveling, both packing in and packing out. The brewery does use 22 ounce glass bottles as well, but the most of their production is either in cans or kegs.
The brewery makes a variety of seasonal beers and this year will be adding a sixth brew to its year-round lineup. Primal Instinct IPA uses Cascade hops grown in the brewery’s own hop yard. The 400-hill yard, on about a third of an acre, is right up against Route 151, in easy view of vehicles passing along on the Brew Ridge Trail. This year will be the third year of production for the hops, so Danny is looking forward to something closer to a full harvest.
A number of chickens live in the hopyard, providing fertilizer and pest control as well as eggs for the restaurant. The restaurant is focused on artisanal production, making everything in-house, curing and butchering meats and baking its own bread. The restaurant sources much of its meat and produce locally, and composts all of its waste. That commitment to environmental sustainability is something Wild Wolf’s customers appreciate. But it only works because of the good flavors of the food in the restaurant and the beer from the brewery. Wild Wolf’s beers are approachable and easy-drinking. “Danny’s brewing style is very creative,” Mary said. “He makes beers which are unique and extremely appealing.” That’s something consumers in Virginia and surrounding areas have been able to appreciate the past few years.