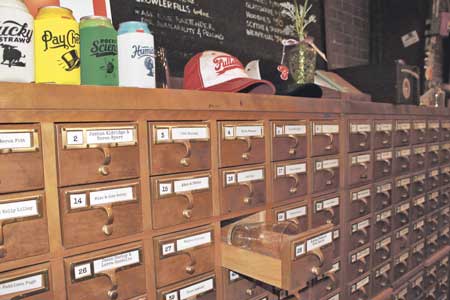 by Karl H. Kazaks
DURHAM, NC — “Our mission is to pioneer the art of distinctly Southern beer,” said the founder of Fullsteam Brewery, Sean Lilly Wilson.
To that end, all of the beers made at Fullsteam are brewed with at least 10 percent local ingredients.
Carver Sweet Potato lager, for example, is made with North Carolina sweet potatoes (and no pie spice).
Brewing with sweet potatoes, Wilson said, includes the challenge of “preventing clumping.” But the result — an easy-drinking, subtle, savory, slightly earthy beer which provides a true taste of the region — is worth the effort.
The mission of Fullsteam goes beyond just how and where they source ingredients, however.
“Our whole passion is the southern beer economy,” Wilson said. “We’re not just a southern beer business. We want to connect our customers to the land and to one another.”
The idea is to use the brewery to develop deep roots in the community. For example, Brumley Forest, a seasonal Baltic porter, uses hickory nuts and black walnuts foraged from a local forest managed by a local land conservancy. One dollar from each bottle sold goes to support the group, the Triangle Land Conservancy.
Fullsteam opened in 2010 in an old 7UP® factory. Wilson picked the location because “it was big enough to use a forklift inside and in a place where people would show up on a Tuesday.”
People have been spending more time in Durham’s historic warehouse district, which has been undergoing a renaissance in recent years, thanks in part to Wilson’s vision to site his brewery there.
“I see us a connectivity center for Durham,” Wilson said.
Being ahead of the curve is part of Wilson’s nature. For example, he was the organizer behind Pop the Cap, the grassroots movement to relax North Carolina’s strict post-Prohibition restriction on making or selling beers with more than 6 percent ABV. The movement, which began right after the turn of the century, culminated in North Carolina’s lifting of the ABV limit to 15 percent in 2005.
Today, Wilson continues to peer around corners. “What consumes me,” he said, “is thinking ahead, thinking, ‘Where do we go from here?’”
Last year, Fullsteam launched a restaurant component to its brewery. It had invited food trucks since its opening. The restaurant sells snacks like deviled eggs and country ham sliders as well as southern tavern fare such as a pork belly bun, a meatloaf sandwich and a pork meatball roll.
“The goal is to make food that goes with beer that tastes like the South,” Wilson said.
Someday, Fullsteam may move production to another location, permitting more space for a bigger kitchen and a restaurant, maybe private meeting spaces, in its current facility.
The brewery’s public space has a quirky yet easy-going feel, using for décor several artifacts from the recent past. For example, an old library card catalog sits behind the tavern bar, serving as private lockers for supporters to store their personal belongings. Elsewhere older video games and pinball machines are lined up beside one of the warehouse’s old brick walls.
Other parts of the brewery experience reveal that no detail has been left unexamined. Beer tastings, for example, are served up on a platter carved in the shape of the Old North State. And when it comes to the brand of the brewery, the word Fullsteam is lettered in a distinctive way: with the “F” flipped on its longitudinal axis, opposite from what you expect.
At present Fullsteam makes 7,000 barrels per year, with about 1,000 barrels being sold on-site. The brewery self-distributes in the Durham area, and relies on wholesalers to reach other parts of North Carolina as well as parts of South Carolina and Virginia.
Brian Mandeville is head brewer. Production is about evenly split between draft and package, with most of the package beers coming in cans.
Experimenting with plow to pint ingredients is a continuous process at Fullsteam. Southern Basil Farmhouse Ale (26 percent local ingredients) combines local basil and native wheat. The grain bill of Humidity Pale Ale (30 percent local ingredients) includes triticale, while First Frost (26 percent local ingredients) is made with foraged persimmons.
Lindera, a brown ale made with foraged spicebush, was featured as a pairing to smoked pork shoulder and farro grits at a James Beard House dinner. Wilson is also working on a muscadine saison.
When coming up with recipes, Wilson’s primary guide stick is “balance. We’re willing to step back a bit in flavor to get the balance right,” he said.
Wilson won’t step away from his mission to build that Southern beer economy. “We’re going to keep pushing the envelope,” he said, “going full steam with purpose and pride to make a distinctly Southern beer, while staying connected with North Carolina’s past.”