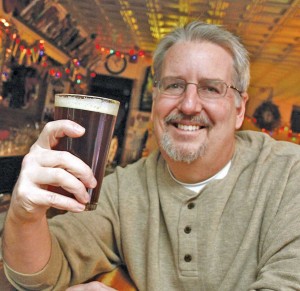 America’s best-known beer writer, Don Russell, will become first Executive Director of the Garden State Craft Brewers Guild this September.
The not-for-profit association that advocates on behalf of Jersey’s artisanal beer makers started out in 1996 as a small collection of passionate volunteers. “There was a time,” says President Ryan Krill, “when the entire group could fit around a single restaurant booth.” But as the industry has boomed – it now pumps over a $1 billion into the state economy annually, the Guild has expanded, too.
“Our board has always done an excellent job of steering the ship,” Krill says. “But they’re also busy running their own breweries. With a membership that’s more than tripled in the last couple of years, it’s become clear: we need a captain. Don will help bring Jersey craft beer to the next level through advocacy and education, and we’re thrilled to have him on board.”
Russell brings with him 40 years of experience as an award-winning newspaper reporter, including 20 years as Joe Sixpack, beer columnist for the Philadelphia Daily News.
He’s the founder of Philly Beer Week, America’s first city-wide beer festival, and the author of three books, including Joe Sixpack’s Philly Beer Guide: A Reporter’s Notes on the Best Beer-Drinking City in America; Christmas Beer: The Cheeriest, Tastiest Most Unusual Beers of Christmas; and What the Hell am I Drinking? He’s also worked as a traveling ambassador on behalf of the US Department of State, and as a brewery tour guide throughout Europe and America.
But, Russell notes, he couldn’t be happier about landing this position in Jersey.
“The state’s been the punchline of many jokes,” he says. “But Jersey Fresh is one of the great slogans. The concept has become institutionalized, and it applies to the beer. That reputation is a source of pride for the craft drinkers here. We’re at the beginning of an explosive growth, and I love being on the cusp of that surge.”
Russell says his goals include bolstering the Guild’s presence not just amongst brewers but within the beer-drinking community, spreading the good word about the positive effects of craft beer on the state’s economy and tourism industry, and growing a brand that’s separate from the influence of Philadelphia and New York.
But first thing’s first.
“My initial order of business,” he says, “is to crack open a Jersey beer.”