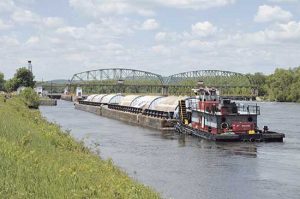 by Cammie Barden
The oldest brewery in New York has been in operation for 125 years. Established in 1878, Genesee Brewing has been continuously providing numerous styles of beers, the most notable being Genesee, Genny Light and the Genesee Cream Ale.
Recently, the brewery decided to undergo some modernization to its production line and tasting room. Undertaking such a process obviously required the acquisition of new equipment, including new fermentation tanks.
These tank, manufactured in China, are 20 feet by 60 feet and are capable of fermenting 2,000 barrels each. Genesee had 12 of them made and shipped to Albany, NY. It was here in the trip the brewery implemented a fun marketing campaign.
Due to the size of each individual tank, it had been decided to ship the tanks across the state through the iconic Erie Canal System. This 200-year-old mode of transport could easily accommodate the size and weight of the tanks.
The trip from Waterford, NY to Rochester, NY was over 200 miles with several locks in which the barges had to stop for a time. And with a whopping two to three mph, the tanks would be traveling slow.
Genesee anticipated the slow traveling and ensured to communicate the trip well in advance to fans and consumers. On Twitter, #toastthetanks was broadcasted to create excitement and recognition to the brewery, utilizing the canal system in the way it was intended during its creation. Other social media sites were also implemented, such as Genesee’s Facebook account. It was also a way to encourage people to see the barges as they passed through, as it welcomed photos and video of the momentous occasion.
To extend the spotlight and to cater to transportation needs, the 12 tanks were separated on to four barges holding three tanks each. Only two barges started the journey on May 23, with the other two barges following the next day. The entire journey took seven days to complete.
Each lock the barges passed through had a crowd of people taking pictures and toasting their favorite Genesee brew. Many in the crowd felt the event was historic and an once-in-a-lifetime opportunity, as the Canal system is now known to cater to personal watercrafts and not the distribution of goods.
Fans found themselves following the barges for multiple days while others took time out of their work day to grab a can of their favorite Genesee and watch the barges go by and snap a photo to share on various social media outlets. Others, unable to get away from their responsibilities, drove down to where the barges were resting for the night to be a part of the event.
The brewery allowed the posting of the photos as well as videos on their Twitter feed. To encourage the response, a contest was held. Simply by posting a picture, the contestant was entered to possibly receive a cash prize of $100. To see the photos and videos posted to Twitter, visit http://tinyurl.com/y9jl9m2d .
Although it’s one of the oldest and largest breweries in the United States, Genesee Brewing has made it a point to modernize and keep marketing itself. The normal marketing strategies are eclipsed by the occasional monumental event, such as utilizing a famous waterway which was instrumental in the creation of many New York towns and businesses. Perhaps Genesee is one of the oldest due to imaginative and opportunistic practices.