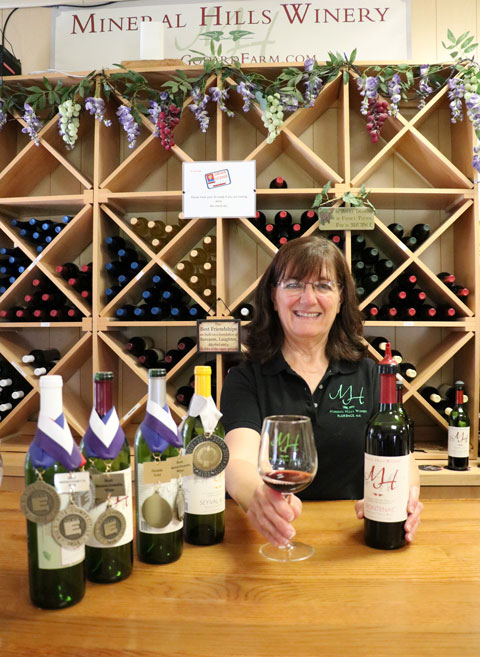 Sue Godard with wine made from fruit from Godard’s Red Hen Farm in the tasting room of their winery.

Mead, a wine made from honey from your own hives, and apple wine and blueberry wine made from the fruit harvested on your farm. That’s what Sue and Larry Godard offer at their farm/winery, Mineral Hills Winery (MHW), in Florence, MA.

Most of their 60 acres was forested when they bought it in 1981. “We cut the forest to build the house and farm,” said Sue Godard. “We built the winery later, in 2008. That’s why we are Godard’s Red Hen Farm: we did it all ourselves” – in honor of the hen in the children’s storybook “The Little Red Hen.”

They planted the orchard and blueberry bushes in 1984. Deciding to diversify the farm, they planted their first grape vines in 2004, and opened MHW (named for the nearby Mineral Hills) in 2010, once they obtained their license. They have a tasting room and offer music events and yoga events in their pavilion.

On weekends, the winery is open for tastings. “People come out and enjoy the wine and enjoy the scenery,” said Sue. “We decided to become a winery when my husband was retiring and looking for a way to improve our income from the farm. Larry’s grandfather had made wine, and, as a boy, he played in the basement of his grandfather’s house while his grandfather and his father and his uncles made wine. We decided to make wine from all the fruit we were producing” – with a nod to Larry’s grandfather, Antonio Pepe from Springfield, MA.

They had been making wines as a hobby since 1980. At first, they made mead. Then they included wines made from the apples and blueberries they grew. One of their batches of blueberry wine, Super Blue, utilizes 3,000 pounds of blueberries.

Turning professional, they started with four varieties and 50 cases of wine. They now have 15 wines, including grape wines. They grow University of Minnesota hybrid varieties and French-American hybrids that do well in the New England climate, such as Frontenac, Marquette, Petite Pearl, Chamborcin and a brand new white grape (for them), Itasca, on a quarter acre.

They also have a grape supplier at Goat’s Peak Farm in Easthampton, where they manage and harvest Cayuga and Frontenac grapes. They obtain grapes from the UMass Cold Spring Vineyard in Belchertown as well.

Since 2010, they have won many medals at the Eastern States Exposition Wine Competition, including Best of State for their Cayuga White and Frontenac. This past March, they won a gold medal out of about 75 entries from the Massachusetts Farm Winery Growers Association. MHW supplies stores from Northampton to Hadley to Springfield. 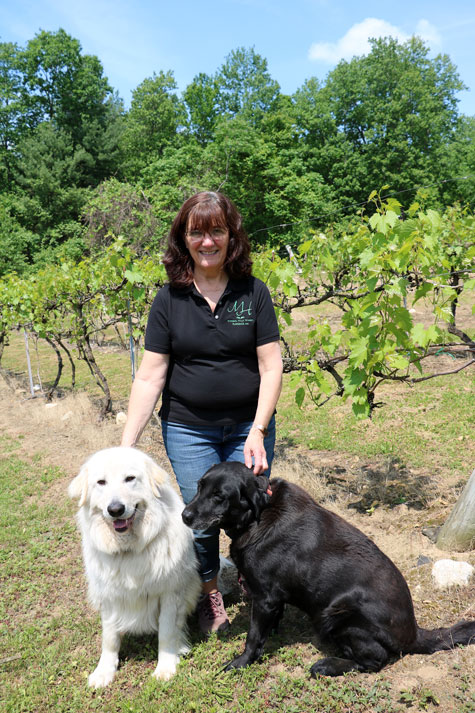 Sue Godard with the farm’s guard dogs Ghost and Ranger by the vines used for the wine they make in their Mineral Hills Winery in Florence, MA.
Photos by Laura Rodley

They aim to have a wine to please every palate. They produced 50 cases of different dry wines for their first opening. “Our first customers asked ‘Do you make something sweet?’ Realizing selling only dry wines was a bad business plan, the next year we had seven wines, with some sweet,” Sue said. They have grown to producing 1,800 cases this year.

To honor their hometown of Northampton, they offer a blush wine called NoHo Blush. They import Cabernet Sauvignon and Chardonnay grapes and their juice to allow them to offer wine from grapes not grown locally. Their Iced Apple wine is made from their orchard’s apples.

This year is the first year they are offering their sparkling wine, Seyval Blanc Petillant Naturel. “We used to grow Seyval Blanc grapes, but those really cold winters in 2016 and 2017 destroyed the vines. Now we source the grapes from UMass and the Finger Lakes in New York.”

They bottle Seyval Blanc Petillant Naturel while it’s still fermenting and it continues to ferment in the bottle. Because it is bottled using Champagne bottles, a beer cap is used to seal them. Produced and bottled in autumn, it’s ready in the spring. This wine must be handled carefully to avoid wine explosions. Served ice cold, this wine has lots of small Champagne-like bubbles.

Four years ago they started offering some wines in recyclable “eco-pouches.”

Their transition to wine sellers happened organically and with apparent ease, as always belies the hard work behind a flourishing enterprise. “One of the hardest things about wines and farming is working with Mother Nature and her temperatures and climates. It can be too hot or too dry – all normal farming things. If it’s too wet, there’s mold. If it’s a really cold winter, plants might freeze and die,” said Sue. “We do have to spray the vines to keep mold, fungi and insects from damaging the fruits and vines.”

Their Le Tre Sorelle is a blend of Cabernet Franc, Cabernet Sauvignon and Chambourcin that has hints of cherry, black currant and vanilla, with a peppery afterglow. As Le Tre Sorelle translates to “three sisters,” Sue asked their label and sign designer, their daughter Anna Marie Pearlman, to make a label featuring herself and her two sisters. “No way do we want our faces on a label,” the sisters lamented, so Anna Marie represented them as whimsical wildflowers: Queen Anne’s Lace for herself, a rosebud for Gina Rose and a chrysanthemum for Krista Lynn.

The best thing about the winery for them both is meeting new people. They like making enjoyable times for people to relax and come together with MHW wines.