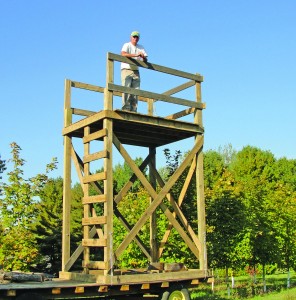 by Elizabeth A. Tomlin
“I think that diversification is the key to most successful agricultural operations,” acknowledged Pete Goderie. Goderie, a partner in Goderie’s Tree Farm and Nursery near Johnstown, NY, was explaining the farm’s new venture in growing hops.
“We have been looking at hops for a couple of years now.”
Goderie explained that Central New York was once the “hop capital of the country,” producing up to 90 percent of the industry’s production. However, between a blight and Prohibition, the hop production was lost to the state in the early 40s.
“We have a lot of years of combined tree knowledge, but this hops venture will be a learning experience for us as it will be for most growers in New York, as it is a new and specialized crop for this area,” remarked Goderie.
He said that since harvest time for hops is August and September, it falls at an ideal time for the tree farm, as it is one of their quieter times of the year.
“There was a lot of prep work prior to planting,” he reported. “We had to set 24 inch locust poles to hold the cable trellising and we had to build a special platform, mounted on an old hay wagon frame to work off of. We call it the hop wagon.”
Goderie recommends using a 5/16 inch carrying cable to accommodate the weight of mature bines and help to keep them stable. A hemp rope, which is biodegradable and also used in their nursery, was hung from the cable and used to support the growing, climbing bines. “You need to use a coarse rope for the plant to cling to as it grows,” Goderie advised. He said he has heard of another biodegradable twine, but has not been able to locate it yet.
Goderie credits his brother, Mike, for designing the cable system, layout and framework for the trellises in the hop garden.
Soil preparation was another consideration.
“We did raise the beds 12-18 inches, because hops do not like wet feet — like many varieties of Christmas trees. We also used a compost/peat moss/topsoil blend when planting.”
Goderie said that weed control was crucial. “It can really impact yields if not kept in check.”
The plants used were propagated from “clean cuttings” by Zerrillo’s Greenhouses in Syracuse in a joint venture with Cornell and are believed to be disease free. “There had been some issues in the past with bringing in plants from other parts of the country — along with their issues,” Goderie reported. “The two pests that I have heard of are Powdery Mildew and Spider Mites, both of which we occasionally find in other plants that we grow, so they will also have to be monitored and scouted for.”
Goderie said that at this time, the market seems very strong for New York hops and that there are also new incentives from the state for local brewers and craft brewers to use New York-grown hops and barley in their production.
“We should have a small amount of hops available this year, but the plants should be at maximum production in about three years. The challenge will be harvesting. Down the road and if everything works out, we will have to build or buy a hops harvester and look into drying and pelletizing equipment.”
Initial costs for a hops harvester are between $15,000-$30,000.
At this time Goderie’s are simply trying to get their plants established. “I was advised by another hops grower, not to cut them back early the first year — let the frost kill them, building more strength in the roots and rhizomes.”
And if things go well they are looking to add another 300-400 plants next year.
“This is a relatively new venture for New York growers,” said Pete. “We will be on the front end of the learning curve and I will be able to let you know a lot of the mistakes we made this time next year!”