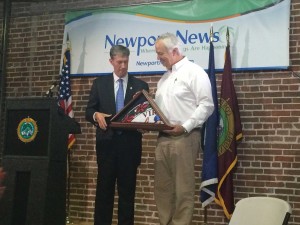 Speaking about the announcement, Governor McAuliffe said, “Today’s announcement is an excellent example of the important role that our diverse agricultural economy can and will play in building the new Virginia economy. This AFID grant to Newport News leverages agriculture to bring together multiple aspects of economic development — entrepreneurship, manufacturing, tourism and community revitalization — in one operation. Projects like these strengthen these important sectors of the Commonwealth’s economy and enhance Virginia’s reputation as a world-class spirts, wine, cider and craft beer producer.”
“Ironclad Distillery’s investment represents an exciting new opportunity for Newport News and our local Virginia grain producers, who are successfully marketing their Virginia-grown inputs to the emerging craft beer, cider and distilled spirit industries,” said Secretary of Agriculture and Forestry Todd Haymore. “We are delighted to award this grant to a project that will not only promote Virginia’s agricultural sector, but also demonstrate the role agriculture can play in urban revitalization. With more than 260 wineries and cideries, 100 craft breweries, and 20 craft distilleries, Virginia is quickly emerging as the preeminent craft beverage player on the East Coast. These entrepreneurial ventures are creating jobs, generating revenue, and helping the Governor’s overall efforts to build the new Virginia economy.”
Ironclad Distillery will invest $100,000 in the site improvements and equipment needed to open a new distillery, tasting room and remote-licensed ABC store in a revitalized warehouse district on the James River. The company’s signature product will be small batch Virginia Bourbon aged in 15-gallon barrels. Ironclad Distillery is named after the famous Civil War engagement between the U.S. Ironclad Monitor and Confederate Ironclad Virginia (also known as the Merrimack), which took place within sight of the distillery.
Stephen King, Proprietor or Ironclad Distillery commented, “With award-winning corn and grains from Renwood Farm in Charles City County, the generous support of the Commonwealth and the City of Newport News, and our unique downtown location engulfed in the brackish air sweeping off the James River, my family and I are very proud to be making a bourbon with a distinctly Virginia flavor.”
“We are excited that the King family has chosen to expand their business operations in our city,” said McKinley L. Price, DDS, Mayor of the City of Newport News. “Ironclad Distillery is poised for a bright future and will be a welcome destination and a catalyst for the renaissance of downtown Newport News.”
Speaking about the AFID grant’s impact for Ironclad Distillery, Delegate Mayme BaCote, D–Newport News said, “I am pleased to welcome Ironclad Distillery to Newport News and I appreciate this important investment and job creation in downtown as the city continues its revitalization efforts in the area. Today’s AFID grant is a testament to the work of our region to diversify our economy and lure innovative companies, like Ironclad Distillery, to create new jobs and bring new investment to Newport News.”
Florence G. Kingston, Director of the Newport News Department of Development added, “Ironclad’s presence provides a unique opportunity to add agriculture to the City’s economic mix, and we are grateful for the Commonwealth’s support, which will encourage the creation and growth of similar businesses in Newport News.”
The Virginia Department of Agriculture and Consumer Services (VDACS) worked with the City of Newport News to secure this project for Virginia. Governor McAuliffe approved a $12,000 grant from the AFID Fund to assist Newport News with the project. Ironclad Distillery is also committing to purchase more than 675,000 pounds of Virginia corn, wheat and rye over three years — 100 percent of the agricultural products needed for the new production venture.