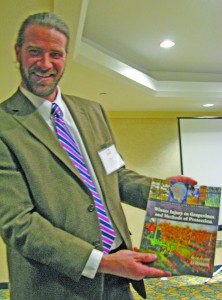 by Sanne Kure-Jensen
“Healthy vines will be more cold hardy than weak vines,” said Terence Bradshaw, UVM Research Tree Fruit and Viticulture specialist.
A vine’s ability to tolerate cold depends on its physiological state and its genetics. A fully dormant plant will be much more tolerant than one deacclimating during a spring thaw. Similarly, before reaching full dormancy, vines may be injured by a sudden fall frost. Breeders select grape varieties for their tolerance of certain temperature ranges.
If a vine sustains significant cold injury, careful pruning can retain some production and yield while limiting the risk of further vine stress.
Disease management is important. Monitor the vines regularly, prune out diseased and dead material promptly and remove it from the site. Bradshaw suggests that four to six vineyard spray treatments per season may be sufficient in most seasons with cold-hardy hybrid cultivars. The most critical treatments are before bloom and just after bloom. Vineyards are so much easier to spray than fruit tree orchards.
Bradshaw is assistant director of the University of Vermont’s Horticulture Research Center. He led a workshop on Grapevine Cold Hardiness at the New England Vegetable & Fruit Growers Conference in December 2013.
Fall and Spring Cold Injury
Changing day length triggers plants to slow their vine growth. This is when plants concentrate sugars in plant cells and ripening fruit. Like antifreeze, sugars lower the liquid’s freezing point and make vines less likely to suffer cold injury in low temperatures.
Vineyard managers remove fruit early for one to three year old vines. This allows vines to store their sugars in plant tissues and especially in its roots, protecting young, shallow roots from winter cold.
Grapes will not ripen below 50 degrees F. Harvest grapes at their proper ripeness, as they will not continue ripening after harvest.
Weed competition reduces energy available to plants in the fall when they need to store sugars and shut down. Pests, diseases or storms can damage or reduce leaf canopy and plant energy levels, causing delayed dormancy and/or reduced cold tolerance.
Temperature Swings
During a mild fall, a sudden frosty night can damage non-dormant buds. Mild springs with several days over 50 degrees F will deaclimate plants and trigger an increase in their biological processes.
Subsequent cold periods — even for a few hours — can cause cold injury as can winter thaw/cold cycles followed by cold periods.
Pruning Remedies
Vineyard managers can assess cold injury levels by randomly collecting 100 buds (20 five-bud cane sections) across a particular variety and plot in spring just prior to pruning. Bring buds indoors to thaw. Later, use a razor to cut cross sections in the compound buds. Brown or black tissue inside the bud center indicates damage.
Compound grape buds born at nodes on canes each contain three bud primardia. The primary buds are the largest buds and produce fruit in the coming season. Secondary buds produce about 1/3 less fruit that primary buds. Tertiary buds do not typically produce fruit at all.
Pruning appropriately for the level of bud damage can lead to a reasonable crop in many varieties. If many primary buds are damaged, leave enough secondary buds to offer fruiting potential as well as stem and leaf growth to sustain the vines.
When primary buds are destroyed and secondary buds are viable, many grape cultivars will still produce up to 65 percent of their typical yield.
Bradshaw recommended managers do multiple bud assessments for each grape cultivar and site condition. Each site variable — like slope direction, soil type and moisture level — will influence plant’s cold tolerance. Wetter soils will lower vines’ cold tolerance.
General Grapevine Pruning Guidelines
Vineyard managers should use care but not be terrified of pruning. There are many accepted techniques. Grapevines are very vigorous and will grow back after pruning giving managers a chance to try again.
Leonard Perry, UVM Extension Horticulturist, recommended that vineyard managers prune during later winter on dormant vines.
• In year one, establish upright shoots from two or three buds. Use bamboo stakes and string or growing tubes. These will be future trunks
• In year two, leave one to two upright shoots; establish bilateral canes (cordons) along trellis/wires. Remove side shoots and stem above top wire. Train two shoots/canes, one in each direction along top wire and secure with plastic ties. Remove other first-year shoots and flower buds early. Allow other side shoots during season.
• In year 3-plus, remove previous side shoots/fruiting canes leaving four to six bud spurs (new fruiting spurs). Leave one side shoot/spur every 6 inches along cane. Cut back to two or three buds in spring after growth starts and danger of frost past. Remove suckers from lower trunk. Leave fruiting canes from nearest cordon/wire. In mid-simmer, thin clusters when forming. Remove some or most leaves than shade fruit clusters.
• During growing season, thin fruit clusters, remove some leaves over clusters to expose them to sunlight.