Great Mead at the Mutton and Mead Festival 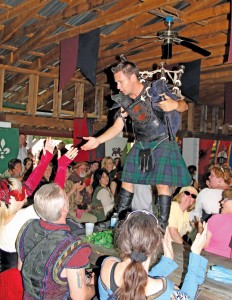 by Laura Rodley
Jousting on live horses, medieval costumes and a chance to go back to the 1400s — when Robin Hood was touted to have lived — are why people arrived in droves at the family friendly 5th Annual Mutton and Mead Festival. One of the biggest draws was a chance to drink mead throughout the day, a drink that has brought kings down to the level of the common people as they drank it, or brought the common people up to the level of the kings.
Organizers of Mutton and Mead host the event as a food drive for The Food Bank of Western Massachusetts and a fundraiser for the Montague Common Hall, formerly called the Montague Grange.
“There were approximately 900 pours over the weekend,” said vendor Garth Shaneyfelt, selling mead labeled Green River Ambrosia, one of three labels of drinks sold through the Artisan Beverage Cooperative (ABC) during the festival held at the Rod and Gun Club in Montague, MA June 21 and 22. “The Rod and Gun Club did the serving, but given the name of the fest, it’s a receptive crowd.”
“Great mead starts with great honey; the world’s oldest alcoholic beverage brought back for modern times,” said Shaneyfelt and consumers enjoyed it during the festival, singing songs in the simulated tavern, as they might have during Robin Hood’s time, listening to great music.
As mead takes a while, they produce around 3,000-4,000 gallons per year, he said. Shaneyfelt was the one of the original founders of Green River Ambrosia. In 2007, he began producing meads and another drink, Ginger Libation, at the Katalyst Brewery in Greenfield, MA that made its own Katalyst Kombucha teas since 2005. Will Savitri was an original founder of Katalyst. They worked together well, and in 2013, the two businesses merged, forming ABC in 2013, a worker-owned cooperative. Other co-op members are Jeffrey Canter, Sandy Pearson, Dave Keramaty, Brendan Burns and Catiya Rivard, who had worked for Katalyst since 2008 and was thrilled to be the first woman worker-member to join ABC in 2013.  The cooperative’s mission is to make the highest quality beverages possible, while considering the social and economic impacts of all their decisions, pooling their vast experiences.
One of their principles is to trade with local farmers. The honey for Green River Ambrosia’s six varieties of mead is supplied by Dan Conlon at Warm Colors Apiary in Conway, MA, head of Massachusetts Beekeepers Association and also New Hampshire Honey Bee, near Keene, NH.
According to a presentation by mead vintner Mark Beran of Medovia posted on the ABC website, honeybees can be traced back over 1-million years ago. The low sugar content syrups such as nectar can experience spontaneous fermentation as a result of wild native yeasts that are present. This is not helpful to the bees because they need the nectar’s sugar for their food, but not the yeast. By drying the honey inside the hive and increasing the osmotic pressure they made their honey less suitable for fermentation by wild yeast. However, some of these indigenous yeasts adapted, to become able to tolerate high osmotic pressure, a condition called osmotolerant. It is these adapted osmotolerant yeasts that are ideal for wine and beer fermentation, and mead. Beran credits bees for being responsible for fermentation basics a million years before man understood yeast fermentation. Mead has its origins in Africa over 20,000 years ago. Feral bees nested during the dry season in Baobab and Miombo trees. When rain filled these hollows during rainy season, the combined honey, rain and inherent osmotolerant yeasts created mead.
The art of mead making has made a comeback in the last decade. Green River Ambrosia uses a no-boil method, warming their honey to around 100 degrees, keeping the floral flavors and making the best mead possible, as part of their mission. For Traditional Mead, they dilute the honey depending on desired sugar content for either sweetness or dryness. Once it reaches the desired pH and temperature for yeast, they are ready to pitch the yeast and pump the honey water, called must, into the fermenter. They use different kinds of wine yeast according to the variety of mead being made. The primary fermentation takes a month, the second, one to four months. They add no sulfites, often used by other producers to stabilize the product. Aging their mead three to 18 months, some meads are five months to two years old when it reaches the shelf.
Or is enjoyed at a festival like Mutton and Mead. Their mead is only sold within Massachusetts, in over 100 stores and restaurants throughout the state.