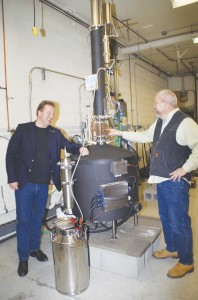 by Jane Primerano
In an unimposing industrial/office park in Wyckoff, NJ, one door reads Great Notch. New Jerseyans know Great Notch is a part of Wayne Township miles away from Wyckoff, where George Washington delivered an address to his troops, but behind this door is a small but active distillery. Randy Pratt, an educator by profession and distiller by avocation, set up the first distillery in Bergen County since Prohibition.
His process is a little more high tech than that used by the bootleggers. It features the iStill, a Dutch invention that streamlines the process of creating craft spirits. Odin VanEijk, inventor of the iStill visited Pratt recently to teach a class in the use of his machine.
Rather than the typical copper still, the iStill is black and insulated to maintain the heat.
The six students in his class came from Pennsylvania, Connecticut, New York and Alberta, CA. They did have some classroom instruction in their hotel from Anne-Sophie Whitehead, deputy director of the American Distilling Institute. Those classes cover distribution and marketing.
“We get to know each other and we go over the whole process, milling, cooking, mashing. They see the fun and the work,” VanEijk said of the students. Each student has his own reason for taking the class.
Frederick Volz and Bill Smith are starting the Nittanny Mountain Distillery, which resulted in them having to explain the folklore around large and possibly fictional catamounts in Western Pennsylvania to their Dutch instructor. Volz will be the distiller. Smith will manage the operation, but both enjoyed their hands-on exposure to the process. Justin Hoken is in the asset management business and hopes to have a distillery on the side. He grew up with family in the hospitality business and noticed Connecticut seems to be easing up on regulations.
Smokey Forrester is a television documentary producer. He is interested in a small still to develop his own recipe for Geist. The German word for ghost, Geist refers to a fruit brandy made from fragrant but low sugar fruits. John LeDuc already works for a large company, Cooperstown Distillery. He said he has a graduate degree in folklore, specializing in hops production in upstate New York. Cooperstown sent him to VanEijk’s class because they want him to learn all possible aspects of the business, he explained. Cooperstown Distillery is known for its bottle shaped like a baseball, but LeDuc said they use regular bottles as well.
Greg Radstack came from Canada because Alberta recently changed its regulations to allow small distilleries, producing up to 100,000 liters per year.
“I’ve been following Odin for a year,” Radstack said, adding “the technology caught my attention.” He said he plans on a “backyard distillery.” Radstack already owns a commercial building with a restaurant and bar. “I’ve started several businesses,” he said. VanEijk said 80 percent of students he has worked with jump right in to a distillery business.
The Great Notch Start-up
Pratt said he started the same way these students did. He went to workshops, took classes and visited distilleries. “I thought I would start up overnight, but it is a process,” he said. The length of the process depends on the state. Pratt planned on starting up a business in New York State but then New Jersey laws changed and made it easier to open here.
“There is always something to do,” he added. Bottles must be cleaned, dried on a rack and then on boards with holes for the neck to make sure they dry inside. Then bottles are filled and corked and labeled. “I’m a one-man show until bottling. Then family and friends help,” he said.
Pratt primarily makes clear spirits: vodka, gin and moonshine which are not aged. His plan is to start distilling aged spirits and has run a test batch.
Pratt’s bottles are an unusual style that mirrors the shape of the still. “It’s an old-fashioned style,” Pratt said. He wanted a look that would be noticeable to patrons. The wide shoulders below the long neck do stand out. The labels are simple with a stylized logo representing the notch and color differences depending on the type. He uses synthetic corks which he says are just as good as natural.
Because of the small size of his space, Pratt doesn’t stock a lot of inventory. His bottling “line” is one bottle at a time and he applies the plastic to his corks with a heat gun. “Eight dollars from Harbor Freight,” he joked. VanEijk pointed out he could use a hair dryer instead.
The still Pratt bought is a perfect fit in the space. It is a 70 gallon boiler which can distill up to 10 liters an hour.