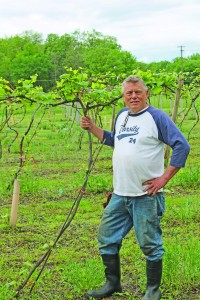 by Bill and Mary Weaver
The establishment of a new industry, based on a plant not believed to be suited to the target area, requires a number of far-seeing people. This was certainly the case in the tenuous beginnings of the wine and wine grape industry in Minnesota and Wisconsin along the Upper Mississippi. Breeders at the University of Minnesota — going back to 1900 and the breeding work of Elmer Swenson, considered the “Godfather of Cold-Hardy Grape Breeders” — were a necessary part. But equally necessary was the role played by John Marshall who tested, grew, and disseminated the vines that convinced other potential growers this was possible.
Marshall first came to believe in the possibilities of a Minnesota grape industry in the 1970s, before the best new varieties had been developed. Back then growers routinely removed their vines from the trellises and buried them under soil or straw to protect them from Minnesota’s punishing winter cold. This, Marshall believed, was impractical. There had to be a better way.
As cold hardy varieties were found or bred, he planted them, developed expertise in working with them, and in many cases discovered they were every bit as cold hardy as he’d hoped. To encourage other growers to try these cold hardy varieties, he first tried selling these fully cold-hardy cuttings to nurseries, but no one was interested. “They didn’t seem to comprehend that there was a whole new industry in the making,” he commented ruefully. “So I told my wife Barb, ‘We’re going to have to do this ourselves.’ I had never, ever envisioned myself running a licensed nursery but I knew that until the vines were available for growers to experiment with, there never would be a wine industry in the North.”
He procured a nursery license and began growing cold-hardy grape vines in a vineyard just north of Lake City, MN. As growers tried Marshall’s vines, the word began to spread and sales of vines grew rapidly. “We got wonderful prices in those early years,” he recalls, “and every vine we grew was sold.”
Marshall’s sales are seasonal. He digs the bare root vines in late October and early November, then bundles them and stores them in his cooler at a temperature below 40 degrees F., but above freezing, for the winter.
From his own vineyards, Marshall markets table grapes both locally and through farmers markets as far away as Rochester, MN. He also supplies wine grapes to a number of area wineries. In spring he can also be found at farmers markets selling propagated cuttings, which he overwinters in his greenhouse and which are difficult to ship, as they have been propagated in pots and are growing plants.
Marshall was fortunate to be able to procure a valuable old variety, bred at the University of Minnesota around 1900, which was not released until 1944. In the 1970s, afraid that the variety would become extinct unless a grower protected it, a graduate student at the University of Minnesota gave him one of a handful of available cuttings that were left.
This variety, called Bluebell, was a cross between Concord and Beta, and was one of the first high quality varieties that could dependably survive Minnesota’s winters without protection. Marshall now has 750 vines of Bluebell, which is becoming recognized as a good wine grape, as well. He also has 250 vines of Somerset and some Valiant, the most cold-hardy grape variety of all, which is reportedly being grown north of Winnipeg.
The Minnesota Grape Growers Association, which eventually burgeoned to an almost unbelievable 750 members in 38 states, seven southern Canadian provinces, and nine foreign countries, played a role in what happened next. “The Association lobbied the state legislature to hire a grape breeder at the University of Minnesota, and the legislation was passed in 1982,” said Marshall.
A graduate student, Pat Pierquet, as part of his Master’s thesis, initiated a grape breeding project from material obtained around Minnesota and even Manitoba. From this material he made crosses, and eventually left 3,000 seeds for future use. “By the time he left the University of Minnesota, he had created the basis for work that would change the face of grape growing in the North.”
Three of the most popular northern wine grape varieties came out of this breeding work: Frontenac, a red grape, released in 1995, and two spontaneous mutations of Frontenac: Frontenac Gris, which has a bronze cast, and Frontenac Blanc, which produces a white wine. All three have become very popular with winemakers and have won major awards.
Several more top-quality wine grapes have been released from the University of Minnesota breeding program since that time, all ripening reliably in the north and very cold hardy. Other varieties are expected to be ready for release in the future.
“We have not come to the end of our journey,” stated Marshall, who has never lost his excitement over the development of promising new grape varieties. “Cold hardy varieties developed here will benefit people in cold climates around the globe.”
Now, vineyards and wineries are sprouting up along both the Minnesota and Wisconsin sides of the Mississippi, where the well-drained soil, the steep banks giving air drainage for cold air, and the moderation of the cold afforded by the waters of the Mississippi have been found to make a very good area for growing wine grapes. From four to five wineries in the 90s, to over 40 wineries operating there today, Marshall’s dream is becoming reality.