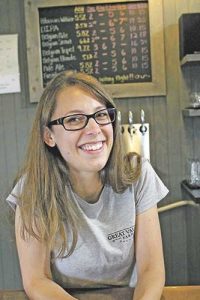 by Karl H. Kazaks
NATURAL BRIDGE, VA — The Great Valley runs through the Appalachian Mountains, all the way from New England to Alabama. People have travelled north and south through the Valley since before the arrival of European settlers.
During the colonial era, the Great Valley was one of the first major areas of settlement, becoming a major agricultural region.
The part of the valley which occupies the central and northern part of Virginia is known as the Shenandoah Valley. Near the southern end of the Shenandoah Valley, in Rockbridge County, a new brewery opened last October called Great Valley Farm Brewery.
It hasn’t taken long for the brewery to catch notice.
Not only does it regularly attract 75 to 100 customers on weekend evenings, it also just won two awards at the 2017 Virginia Craft Beer Cup. Great Valley’s Lemongrass Basil Saison won first place in the spice, herb or vegetable beer category and its Stout won third place in the dark British Ale category.
The brewery, owned by Nathan and Irma Bailey, is an extension of Nathan’s long-time home-brewing hobby.
But brewing isn’t the only kind of fermentation which interests him. He hopes someday to make wine too. The Baileys planted four acres of grapes in 2012 and currently sell their harvest. Within five years, they hope to have built a new production facility to enable winemaking and to be selling their own wine alongside their beers.
The brewhouse uses an electric system from Brewmation. At present, almost all of the production is sold through the taproom, either for on-site enjoyment or as growler fills.
There’s plenty of enjoyment to be had at the brewery. In addition to the tasting room, there’s a patio with adjacent corn-hole area, plus a picnic area where food trucks set up every Friday and Saturday evening. The picnic area overlooks the Great valley, with an impressive view of the Blue Ridge Mountains to the east.
The setting gave rise to the brewery’s slogan, “Amazing Views, Fantastic Brews.
Nathan bases his approach to brewing on the Belgian farmhouse tradition. The tasting room has eight taps, featuring a rotating assortment of beers, including a Belgian Blonde and a Saison, as well as a Pale Ale and IPA. There’s also a Hibiscus Witbier, with an attractive rose coloration.
Natural Bridge attracts a number of tourists for its famous natural landmark — a “natural bridge,” recently protected by a state park designation — as well as a local safari park and the nearby historic town of Lexington.
Because so many visitors come to this part of the Great Valley, prior to opening the brewery Nathan was expecting to see a number of out-of-towners. And they have come — from as far away as Texas and Australia.
But he has been surprised at how much of his business has come from local clientele.
One of his loyal customers recently became an employee.
Tamara Christie first came to the brewery with friends. She “loved the beer,” and she and her friends returned. Now she works in the taproom, introducing new customers to the Great Valley’s brews.
She’s proof of the slogan found on a sign in the tasting room, which motivated Nathan to build his brewery: “Pour it, and they will come.”