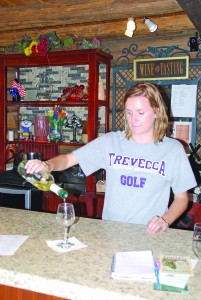 by Jane Primerano
Minnie Pearl lied.
For all those years she stood on stage with the price tag hanging off her hat claiming to be from Grinder’s Switch, TN.
She lied.
There is no Grinder’s Switch, TN.
There is a Bucksnort, TN, but not a Grinder’s Switch.
There is a railroad switch referred to as Grinder’s Switch and for the past eight years there has been a Grinder’s Switch Winery. Speculation there is that Minnie Pearl just liked the name.
The winery is close to the railroad and owner Joey Chessor is a railroad buff, as well as a wine buff.
“He has been playing with grapes and wine for 10 or 15 years,” Chessor’s daughter, Jodie Morgan said. “He got a license in 2006 and opened in 2007.”
Chessor has six acres planted in grapes, two in muscadine, making for about 30 percent of the total needed to make his wine. He brings in grapes from the Finger Lakes, Eastern Tennessee and even Southern Georgia, including two types of muscadine not grown on site. He grows Cabernet, Tremonet, Chambourchin and Tuega Nacionale on the property and makes all of the wine himself.
“It’s a family business,” Morgan said, “we have people working for us who are related or really good customers. Our customers and friends come in to help bottle the wine. Most folks are happy to help. Four family members work here all the time. We have people who work for wine.”
In Tennessee, most popular wines are sweet, Morgan said, and Grinder’s Switch’s Switch Red, a sweet red made from Concord grapes with an artisanal finish is very popular, but the winery is actually best known for a dry estate wine called The Rebel. It is made from Tuega Nacionale grades, barrel aged and unfiltered.
A compromise wine is the blush, “like half-cut sweet tea,” server Alex Qualls said.
Another popular is Razzbury, a refreshing, tart fruit wine, although Morgan admits it is difficult to grow enough fruit for a wide variety of fruit wines.
Ivory Mist is a popular summer wine.
“We made many attempts to make fruit wines,” Morgan admits, they tried with concentrate and fresh fruit, neither of which was particularly effective. A blend of fruit with grapes actually makes the wine taste more fruity, she said.
Equipment is an issue with fruit wine, she noted. “The tiny seeds require a whole ‘other set of equipment to remove the seeds and if all the seeds aren’t out, the wine tastes funky.”
Four employees work the tastings, including Qualls who has eight months to go before she can legally drink what she pours.
Grinder’s Switch didn’t jump at the chance to charge for tastings.
“That law works best for larger wineries because it eliminates tie-ups at the tasting bar,” Morgan said. “People aren’t as likely to taste every wine in the place.”
“People need to pick and choose what wines they want,” she added, noting “it’s not likely for Grinder’s to charge unless they grow exponentially.”
Another new law allows wine sales in supermarkets. “There was a lot of lobbying against the law, it allows the sale of wines from all over and could hurt local distributers, but not the wineries. After all, beer is sold in grocery stories. There are plenty of liquor stores. And, people still drink whiskey; good liquor is making a comeback, it was overshadowed for a while by flavored vodkas and Jaeger-bombs.” Morgan said.
The wine club boasts 120 active members. “We ship quarterly for our sanity,” Morgan quipped.
The winery building was the Chessors’ house and for a while after they opened, they lived in an addition on the back before their built their new house.
The tasting room features a section of local products, including copper jewelry made by one of the employees, eco-friendly bug spray and goat’s milk soap.
Morgan does catering as well as working at the winery, she said.
Grinder’s Switch has blue and wine nights with free music and features a Sunday happy hour with music.
“They are pretty successful,” Morgan said, “you have to do things to remind the public you’re still here.”