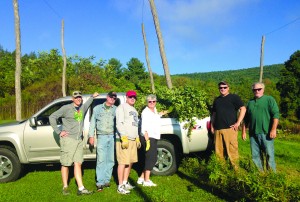 by Katie Navarra
Brothers John and Scott Heiser often talked about opening their own taproom. “I think every guy has had that fantasy at one time or another,” John Heiser said. Though a taproom may be years in the making, the brothers aren’t waiting to get involved in the brewing industry. In 2008, John planted hops in his backyard garden for use in his home brewing experiments. Three years later, Governor Cuomo passed the farm brewer legislation designed to support and strengthen New York craft breweries. The law requires farm breweries applying for a license in New York State to use at least 20 percent New York grown or produced ingredients. In 2023 that increases to 60 percent and by January 2024, farm brewers will be required to use 90 percent New York grown or produced ingredients.
After learning about the legislation, Scott convinced John they should grow hops on a larger scale to sell to local farm brewers. In May 2011, the brothers planted 100 rhizomes on their parent’s property in Middleburgh, NY. “Our parents, Jim and Kitty, own seven acres, but only a small amount of that is farmable,” he said. They later planted another 100 plants, bringing the total to 200 Cascade plants. Realizing they needed more land, they approached John’s brother-in-law, Larry Hamm, about expanding their budding operation to his property in West Fulton, NY. Larry and his wife Debbie agreed and in 2013, 400 Nugget and 400 Cascade plants were established.
Like other hops growers, the Heisers use a trellis system. “It is a rather elaborate and expensive endeavor in the beginning,” he said. Poles are spaced 25’ apart and a taut, steel cable connects each pole. A piece of twine attached to the cable, drapes to the ground, giving the plants something to grow on. “Different growers have different strategies, but most commercial growers use some variety of this setup. We continue to tweak our strategy as we go, we’re always learning new techniques,” he added. Harvest amounts vary widely based on plant maturity, weather, plant variety and maintenance. Typically, if things go well, the hops produce a partial harvest in year two, and are producing more fruitfully in year three. “We harvested approximately 35 pounds of fresh/wet hops from approximately 80 plants on our first planting’s second year (2013),” he explained, “last year, in 2014, we harvested approximately 100 pounds of fresh/wet hops from those same plants.” If all goes as planned in 2015, the first planting should produce to their full potential and the second group of plants established in 2013 should provide at least a partial harvest.
Once the bines are harvested, they are trucked to a large-scale harvester in Morrisville for picking. “It would take one person on average one hour to pick a mature bine. A machine can pick approximately 100 bines per hour,” he said. As the business grows, the brothers hope to purchase their own harvester to save time and increase profits.
As members of the NYS Hop Alliance and the NYS Craft Brewers Association, the Heisers are able to list their products in the online database of growers for brewers to reference. “We hope to continue specializing in selling to New York state brewers. Farm brewers across the state and as far away as Florida have contacted us about our hops,” he said.
Their Facebook page has served as their main marketing tool, but in-person sales calls are their most important form of marketing. “We’ve found nothing can replace face-to-face contact with brewers and establishing a personal relationship,” he said, “it is important for the brewers to know where their hops are coming from so they can tell their patrons that their product uses local and/or New York State ingredients.”
While John and Scott consider Heiser Hops a “side-gig” at this point in life; they are dedicating time and resources to position the business for future expansion. “Our careers, families, etc. come first at this point. But we’re planning to apply for a New York State farmers grant this spring and if we are awarded grant monies it will allow the operation to expand at a much faster rate,” he said.