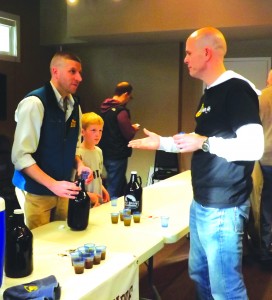 by Kelly Gallagher
Pete Bednarek — a high school principal by day and a craft beer purveyor by night — has a unique way of describing the back story of Wolf Hollow Brewing Company, which he founded with a local holy man named Jordan White.
“A preacher and a principal walk into a bar…” Bednarek joked at a Jan. 24 event held at Mabee Farm Historical Site in Rotterdam Junction, NY, at which the founders discussed their company’s beginnings and their future plans. The talk was followed by a question and answer session and a beer tasting.
Two basic goals guide operations at Wolf Hollow Brewing Company. The first is the consistent creation of high-quality products. The second is maintaining a strong connection to West Glenville, where Wolf Hollow Brewing Company is located and the place the founders call home. The company motto is “Your Beer, Brewed Here.”
Although Schenectady County, the region in which West Glenville is located, has a rich brewing history, there are currently only two brewing businesses in the entire county. The name “Wolf Hollow” is a reference to a geological feature located near the brewing facility.
Generous donations from local individuals who believed in Bednarek and White’s vision helped the project get off the ground, making Wolf Hollow Brewing Company truly a community-grown endeavor. Wolf Hollow Brewing Company recognizes their early backers by allowing them to help develop and name seasonal brews.
Bednarek and White developed an interest in brewing independently of one another, but only White has official training as a brewer. He attended the American Beer Brewer’s Guild in Middlebury, VT and was subsequently set up with a five-week internship at Ommegang Brewery, near Cooperstown, NY. White’s internship experience helped him secure a job as an assistant brewer at the Adirondack Brewery in Lake George, NY, a position he held for a year and a half.
Wolf Hollow Brewing Company opened its doors in November 2013 and currently operates out of a former grange hall, brewing 75 gallons of beer a week. They feature three mainstay beers, along with rotating seasonal brews. Their most popular brew is the District 6 IPA, a tribute to the local fire department. Two nights a week, the beer is distributed into glass growlers for off-site consumption. Thirty-two and 64-ounce growlers are available for purchase on site, and other containers can be brought onto the premises for filling – within reason.
“No Welch’s Grape Juice jugs,” White said with a smile, referring to an actual incident. “We have to draw the line somewhere.”
Wolf Hollow Brewing Company has also ventured out into the town and surrounding communities. Wolf Hollow Amber Ale is available on tap at a bar in nearby Galway, NY, and the company participated in the 2014 Glenville Oktoberfest.
On the first anniversary of Wolf Hollow Brewing Company’s grand opening, Bednarek and White were joined by a third partner, Bill Kenneally. The trio made plans to expand the business in terms of both physical size and production quantity. The operation is scheduled to move into a nearby larger building, a former auction hall, in spring 2015. But even in light of the exciting new changes, Wolf Hollow Brewing Company remains dedicated to staying in close contact with the community that gave the business life and continues to support it. “We want to be the ones delivering kegs, selling to restaurants, interacting with our customers,” Bednarek said.
A custom-built, seven-barrel brew system by Deutsche Beverage Technologies is currently being manufactured for the new space. “I reviewed, altered and approved technological drawings myself,” White said, in order to ensure that the machine will match Wolf Hollow’s needs. The current plan is to produce 430 gallons a week. There are plans for Wolf Hollow to feature more beer styles, including a lager, and, thanks to a new liquor license, sample flights and pints.
“We don’t currently have a plan in place for packaging our beer,” said Bednarek. “Maybe down the road. Right now we’re about concentrating on freshness.”
For more information visit www.wolfhollowbrewing.com .