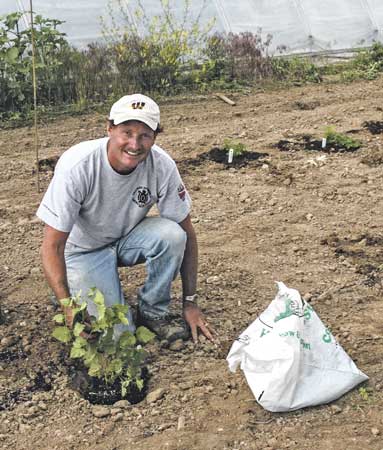 by Laura Rodley
While sipping a prizewinning beer brewed onsite at High Hops Brewery, the first microbrewery in Windsor, CO, customers can peruse the garden center gift shop and pick out houseplants. Or, you can choose your garden seeds, garden décor or yard art to set up a garden once the soil warms up.
“You can grab a beer, look over the seeds, and look out at the hop field,” said Zach Weakland, fourth generation grower and head brewer.
His parents, Pat and Amanda Weakland, opened Windsor Gardener in 2001, after garnering a decade of greenhouse expertise from owning their business Plant-a-Scape. Pat grew up working in his father’s greenhouse in Longmont, CO. Amanda first earned her green thumb working on her family’s farm.
In 2007, they started growing hops. Currently, they grow two and a half acres of hops within a 15-acre space on their property, all available for future planting. The hops flourished but they didn’t have an immediate outlet to sell them.
“In 2010, we started a home brew shop because we had so many hops. There wasn’t a market for using whole leaf hops. In whole leaf form, they clog up equipment. For the most part, commercial breweries use pelletized hops. There were a few small brewers that took our hops,” said Zach.
Undeterred, they taught home brew classes where customers could buy supplies to make beer. “The classes were actually where some of our recipes for the brewery came from. My Dad and I used to do that,” Zach said.
In 2012 they opened their brewery. They offer 40 taps, including The Golden One, winner of a gold medal at the Las Vegas International Beer Festival and silver at the 2015 Denver International Beer Competition; The Honeyed One, Best of Show at 2014 Snow Mountain Brewers Festival; and The Weise One, made with cascade and mountain hood hops and Hefeweizen IV yeast, gold winner at 2014 Denver International Beer Festival.
They have six stainless steel brite tanks and 21 fermenters, ranging in sizes from 300 to 2,000 gallons.
“It’s more than a full-time job, but not really a job, because it’s really fun,” said Zach.
They have to harvest, dry and pack the hops and create storage space and hopefully grow enough to meet the demand of their brewery.
“Everybody likes the hops forward beers,” said Zach. “The market was there before we started with hops” and they caught the wave. In 2016, they brewed 2,100 barrels. In 2017, they brewed 2,400.
The brewery and garden retail space are housed inside the same building. They have 16 staff on hand. In summer, that bumps up to 25 inside the garden center and brewery. Zach’s younger sister Rachel does nonprofit fundraising events. His wife, Kati Zybko, works in the tasting room.
In 2010, they encountered aphids on the hops. “The aphids ruined the crop,” said Zach.
To manage the aphids, they introduced beneficial ladybugs in 2012, which they feel are worth their weight in gold, “if you want to not use pesticides.”
Zach is a runner. Being an athlete is an asset because it infuses him with the energy, endurance and patience befitting a head brewer. “This is a kind of life where pretty much anything is possible, depending what kind of hurdles you go over, and be creative, and how far you are willing and want to go,” said Zach. Next on the list is a distillery.