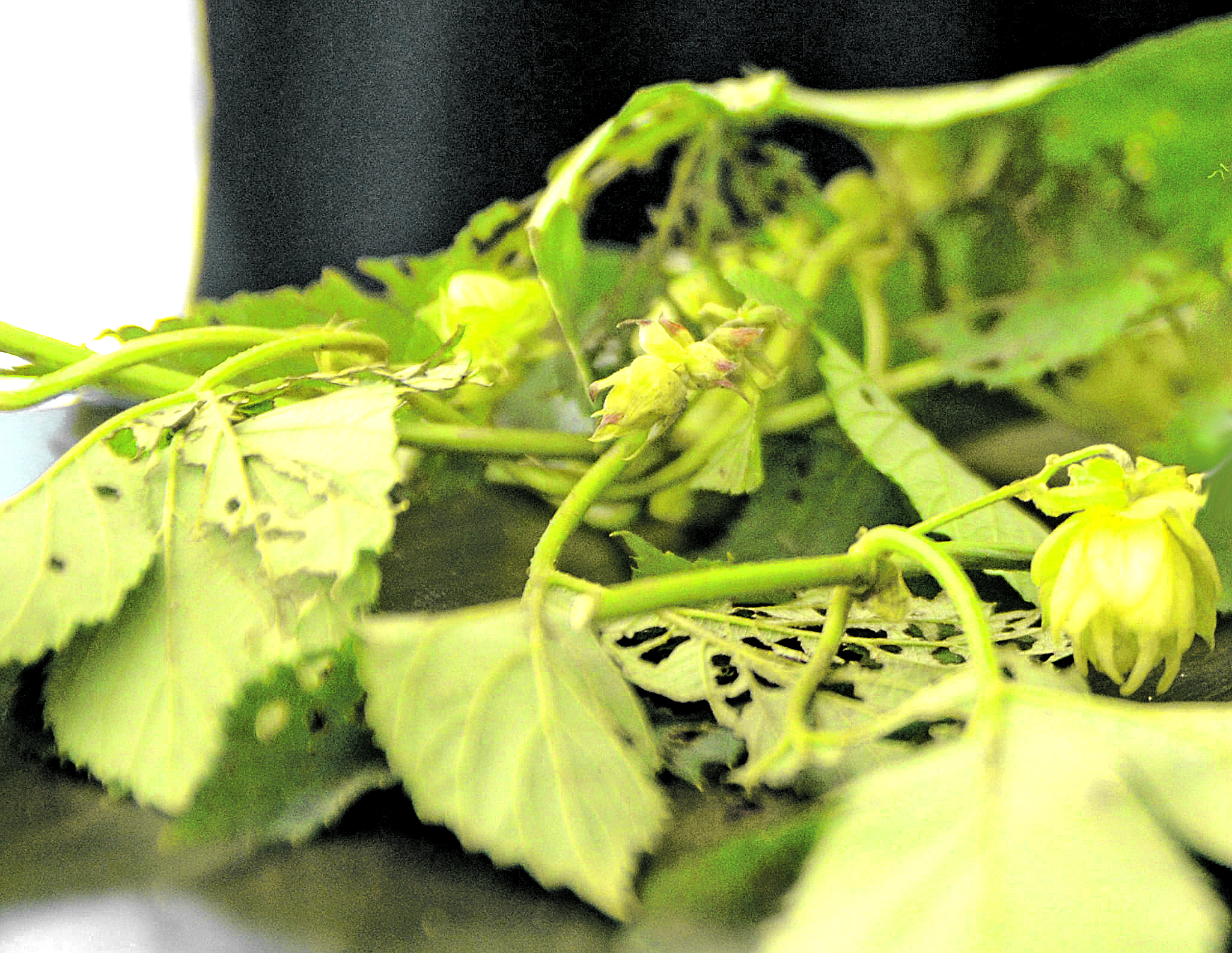 Viruses are normally detected by properties in their outer coat. But viroids are made of RNA only, with no outer protein coat, and are therefore difficult to detect. Viroids, like viruses, can spread throughout the plant, but exactly how they are transmitted remains mostly unknown.

“Early growth will be delayed. You have overall reduced plant vigor and reduced yield” with hop diseases, said Melanie Lewis Ivey, Ohio State University plant pathologist, who shared insight into these hop diseases during a recent University of Vermont webinar.

Because the effects of the viral diseases are cumulative, over time crop yield loss can be high, increasing each year as the disease progresses. The good news is that the cone’s brewing characteristics don’t seem to be altered with viral infections.

“For viroids, the impact is a little bit bigger than viruses. You’ll also have stunting,” she warned.

Stunting from viroid infection reduces foliage and cone development, and the damage rapidly develops and accumulates year-to-year. Cones will be impacted by viroids, with development of cones affected by viroid pathogens.

Hop mosaic virus symptoms include chlorotic speckling, which might appear to be insect damage early in the disease process. American latent virus and hop latent virus are almost always present in conjunction with this disease, Ivey said, and these three viruses normally occur as a mixed infection.

Stunting that occurs with viroids is temperature dependent. Warmer seasons bring about worse symptoms. Lateral branching is reduced, and there is not enough plant tissue to photosynthesize. Light green leaves, speckling along the leaf veins and reduced, dwarfed cones are other symptoms of viroid infection.

“It’s really dramatic how small and sparse the cones are” with significant crop loss from viroids, Ivey said.

Transmission and Prevention
No matter the particular viral or viroid disease, the management strategies are the same.

Propagation, crowning, transplanting and root grafting activities can all spread the disease. Transmission through normal crop cultivation practices is very common for viruses and viroids.

Aphids can also transmit viral diseases, but apple mosaic virus is not believed to be insect vectored. Aphids contract the other viruses incidentally during feeding and quickly deposit them on the next plant. Managing aphids is therefore not too effective as a primary method in virus disease control, Ivey said. It is unknown if viroids are vectored by aphids or not.

Sanitation is the primary method of reducing transmission once an infection has occurred in a hop yard. Beginning with clean planting stock is critical, given the ease of transmission of viral diseases from plant to plant. Because viruses can remain latent for several years, it is important to realize that just because a plant looks uninfected, it doesn’t mean that it is! Starting with virus-tested, clean stock is a must.

Ensuring that viral infections are caught as soon as possible requires routine scouting. Inspecting the tops of plants is important throughout the season, and even the leaves at the top of 20-foot-tall plants need inspection. Picking the leaves off for close examination if anything unusual is spotted is critical. When scouting, flag plants that seem to be infected for additional monitoring and treatment.

“Early detection is really critical. You want to scout your yards regularly, at least once per week,” Ivey advised. Larger yards can be divided into scouting blocks to reduce overall scouting time each day, with each block examined one day per week. “You don’t have to inspect every plant, but you want to do it in a random pattern where you can get the most out of it.”

Before pulling out the plant, Ivey recommends confirming the virus. Because the virus can be present in a latent form, without symptoms for many years, pulling out infected plants might not significantly alter the disease profile in a hop yard. If a viroid is confirmed, however, all symptomatic plants should be removed as transmission is not fully understood, and the results of the disease are severe.

A Nebraska Hop Extension newsletter recommends pulling out individual hop plants in a mature hop yard if viruses are confirmed and symptoms of infection are seen in less than 10 percent of the plants. If infection rates are higher, the entire yard should be replanted.

These viruses can survive in plant sap, outside of the plant, and are readily carried on tools, hands or articles of clothing. Wearing clean clothing each day, cleaning tools between plants, working with any symptomatic plants last, removing pruning material immediately and disinfecting equipment are all important in reducing disease transmission.

Tools should be cleaned of all dirt and sanitized between each plant. Twenty percent skim milk in powder, then mixed with water, is an extremely effective but smelly disinfectant. Lysol or a 10 percent bleach solution are other options, and other commercial products are available and effective, Ivey said. Tools which have sanitizers built-in are also available, such as some model pruning shears.

“Ideally, you would want to sanitize your tools after every cut, but that’s just not feasible. Generally what we say is after every plant or hill,” Ivey said. “The more that you sanitize, the better.”

She advised that growers complete early season leaf removal and perform any shoot removal, either per plant or per hill, and then sanitize the tools and their hands.

Using contact herbicides to remove basal growth at spring pruning times can potentially help with virus containment by reducing contact with infected plant material, according to Michigan State University. While even this method could provide an entry point for viral pathogens, the risk is probably much lower than with mechanical pruning, Ivey stated.

Hops are a perennial crop that are being widely planted to supply the craft beer industry, and hop growers are becoming more numerous as demand for craft beverages increases. Ivey surmised that most established hop yards in Ohio are already infected with one or more viruses, and that conditions are probably the same in the Northeast. Intensively scouting for disease symptoms, optimizing sanitation and planting only clean planting materials are the best protections against hop viruses and viroids.

“There hasn’t been a lot of work done on biocontrols that can induce the natural immunity within the hops plant,” Ivey said. “It’s worth looking more into, but anti-virals are tough in any type of crop.”

The Hop Power Hour webinar is available for viewing at youtube.com/watch?v=6sKe_Ot0pwM.