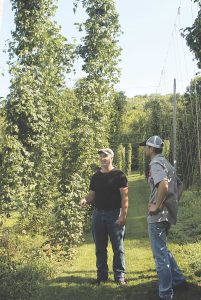 by Michael Wren
COOPERSTOWN, NY — With the hop harvest underway, Brewery Ommegang’s hop grower Jason Stone is eager to begin. However, instead of the age-old method of hand-picking hops, he enlisted the help of Jeff Heintz, co-owner of HopsHarvester, who designed a new machine to automate this time consuming process. Local hop growers attended the demonstration to see the harvester in action.
In the 1800’s New York produced 80 percent of the country’s hops. However, insects, a blight, and finally Prohibition caused most farms to abandon their hop crop. Since then hop production has moved to the Pacific Northwest where the climate and mechanization allow for larger and easier harvests. With the Farm Brewery Law enacted in 2012, hop growing is coming back to New York as local farmers begin growing hops once again for the craft beer boom seen in recent years. This has reopened the market for both hobby and commercial hop growers.
Working at Brewery Ommegang as a hop grower, Stone has grown both the quantity and varieties of hops produced at Ommegang. Growing multiple varieties allows for experimentation of both growing techniques and flavors.
As the harvest began, onlookers watched as Stone and Heintz started with the Cascade variety, a common hop in the craft brewers’ arsenal. Stone watched as the bines were quickly and efficiently turned into a full bucket of hops. The hop growers watching are astounded to see hours of work reduced to minutes.
Jeff Heintz and John Bonzo started HopHarvester four years ago in 2012 and began production in 2013. The machine used for this harvest is the 4th generation design. When Bonzo began growing hops he would handpick them with the help of his friends. Once it became too much to handpick he realized that a machine would make it a more viable venture and so Bonzo and Heintz set out to make a hop harvester for smaller commercial growers. “It’s hard for farmers to transition from a hobby farm to commercial production,” said Heintz, “and this machine will make it easier and more profitable for farmers to reestablish their roots in the hop industry.”
Every year Bonzo and Heintz change their designs to improve the harvester and listen to the growers in order to better understand what they need and want from a small commercial harvester and give demonstrations throughout New York to show budding commercial hop farms a more efficient way to take in their crop. This drive for efficiency and commitment to other hop farmers really set HopHarvester apart from the rest. Bonzo and Heintz have sold over 100 harvesters throughout North America and with their continuing improvements hope to continue producing efficient harvesters.
As the Farm Brewery Law demands more and more local products be used in making beer, hop growers will need a fast, efficient method to harvest their hops.