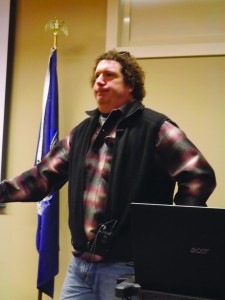 by Kelly Gallagher
To fully understand the practice of hops farming in New York today, it pays to know the crop’s history in the Empire State. During his talk, “Heritage Hops,” held at the Mabee Farm Historic Site in Rotterdam Junction, NY, farmer Dietrich Gehring talked about the of history of New York State hops farming, he also shared details of his growing experiences before an audience of  novice hops growers.
“Hops picking was romanticized [in the late 1800s] because it was such a laborious job,” Gehring said as the image of an illustrated advertisement appeared on the slideshow screen. Publications such as Harpers Weekly would publish materials like this, inviting people from elsewhere to come to farms and work as temporary pickers. These ads and flyers never depicted any of the unpleasant realities of working in the field, such as hot conditions or itchy plants. “One plant could take an hour to completely pick,” Gehring explained, emphasizing the tedium of the work. But many hands were necessary. Trains were even chartered to carry help from New York City to upstate hops farms, so great was the need for pickers.
In 1879, Gehring said, New York State grew more than 40,000 acres of hops. But a variety of factors, including competition from western states and downy mildew, hurt the industry. Prohibition was the final nail in the coffin for large-scale hops growing in New York. In 2009, Gehring said, only 15 acres of hops were dedicated to hops in the entire state.
Gehring and his wife decided to try growing hops on some land leased from her family’s orchard in Altamont, NY. They took the effort to the soil in 2011. When harvest time came, they knew they needed some help, so they employed a shrewd tactic. “We had a hops harvesting party and asked people to pick by hand, just like in the old times,” Gehring said, showing pictures of friends who showed up to lend a hand. “We had no mechanization.” They sold the hops to a brewing company in Albany, NY and called the experience a success. The next year, they decided, they would do a full acre, four 650-foot rows. At harvest time they held another hops-picking party, but also decided to rent a picking machine from a nearby agricultural college. They also sought out assistance with drying and palletizing their hops. They sold their dried hops to a brewery in Brooklyn, which brewed and sold a beer known as Indian Ladder Farmstead Stout.
This victory, coupled with the advent of hops-friendly state legislation encouraged Gehring and his wife to delve deeper into hops growing. But local knowledge of the crop had long dried up. So they traveled to Oregon’s Willamette Valley to do their research. There, they visited Rogue Farm, which grows approximately 2,700 acres of hops. Gehring noted that the level of hops on the drying floor was so deep, special hops shoes, not unlike snow shoes, were a necessity when taking moisture readings. He also marveled at the massive pickers on site, which were large enough to justify their own warehouses. “We couldn’t wrap our heads around how large they were,” he said. “And they couldn’t wrap their heads around how small we were.” But they are about to get bigger. Their next project, Gehring announced, the Indian Ladder Farmstead Brewery and Cidery, is officially a work in progress. And all of the pieces are slowly but surely coming together. Currently, they are awaiting the arrival of a Wolf Hop Harvester from Poland. “I’m told it’s in the middle of the Atlantic right now,” Gehring said. Grant money will be used to help pay for drying floors and balers.
The Indian Ladder Farmstead Brewery and Cidery will be in good company. According to the Albany Business Review, the number of New York breweries, cideries and wineries has doubled in the past three years. This is undoubtedly due in part to the 2012 New York State farm brewery law that encouraged brewers to use local ingredients for a tax credit and other benefits.
Gehring had previously planted six varieties of hops, and plans to add four more this year. He cautions new hops growers to look to the history of hops in New York. Downy mildew, which played a heavy hand in wiping out the crop in the state generations ago, has not left the area and growers must be prepared, even if they have grown hops a year or two without issue. He encourages growers to spray against the disease and to vary their approach. “Downy mildew is good at adapting,” he said.
Insects are not a major issue thus far for Gehring and his wife, but nevertheless, they have a system for dealing with them. They make sure not to mow too often to prevent leaving no vegetation for insects to eat apart from their hops plants. They also set up traps for the insects and frequently perform counts to determine how many beneficial insects are present versus how many harmful ones there are. When the problem insects vastly outnumber the beneficial ones in the traps, it is time to take action.
Although producing hops is a new venture, Gehring says the upcoming establishment will primarily be a cidery. The land on which the hops are grown is part of Indian Ladder Farms, is a family-owned orchard. Its first fruit trees gained maturity in 1963. The orchard is a popular seasonal destination for locals looking for fresh fruit.“I hope to see our beer for sale at the general store,” Gehring said. “I hope people will stop by to pick an apple, get a doughnut, and have a beer.” He added, “We’ll probably always have a small hop party at harvest time.”