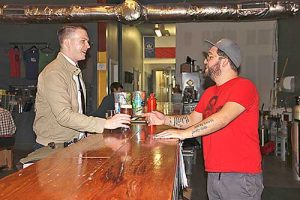 by Laura Rodley
The Hops and Grain Brewery not only brews outstanding beer, they brew jobs. Since last summer they have filled eight new positions.
“These are positions that didn’t exist until the last 12 months,” said Sheila Garcia, Marketing Manager for the Austin, Texas brewery for the past year and a half. They have 17 employees, three of which are women. Two of the women are ‘brand ambassadors,’ who serve beer in their taproom bar for the brewery, which just turned five as its first brew occurred on Oct. 7, 2011.
In 2012, they earned the World Beer Cup Gold Medal for Alt-eration, their German Brown Ale or Altbier. They are also known for their hop-forward beers and lagers, “but our number one seller is our dry-hopped pale lager, The One They Call Zoe,” said Garcia. They also offer a Pale Mosaic, an American India Pale Ale (IPA), 78702, a German-style Kolsch and a Greenhouse IPA.
The ingredients themselves sound delicious. Their Porter Culture, a Baltic Porter, starts, according to the Untapped.com website, with a base of Pilsner and Munich malts, then chocolate wheat and de-bittered black malt are layered in to provide a flavor of coffee, dark chocolate, raisin and a hint of roast.
They also have rotating limited beers, plus handmade Brew Biscuit Dog Treats utilizing the leftover spent grains from the brewing process.
They recently finished installing a brand new sensory lab for education and to test their products. Currently they use their staff to test the product for taste and aroma, emulating the work of a cicerone, someone who has achieved the highest level of beer education.
“There’s certified, advanced, and masters, only 10 people in the world, upwards to 20,” said Bob Galligan, Education and Quality Control Manager, who holds the title of Certified Beer Server.
Over in the Hops and Grain’s lab, Bob Langner, Operation Manager for two years, meticulously performs vitality tests on the yeast, accessing, “The yeast’s abilities to go through its metabolic tests let’s me know how well it will perform when I pitch it into a new batch of beer,” said Langner. He tests the yeast on a daily basis, in the various stages of its life.
“Bob is our first op’s manager. We are the smallest brewery in Texas to have a lab on site. We do a lot of firsts,” said Garcia, adding, “That’s smallest in relation to production. This year we’ll be pushing 11,000 barrels.”
To create capital to pay for their ventures, “We have partnered with Able Lending Company, but are also able to turn capital. We have investors. This year we got a ton of equipment,” said Garcia, such as a new brew tank to make Saison.
They are one of 15 vendors in a shared warehouse. They brew using 18 tanks of various sizes in 15,000 square feet of space. Barrels of beer age in their taproom and they can their beer on site to sell throughout Austin and surrounding areas.
Their friend and loyal customer Nathan Ehrmann stopped by to have a brew, served by brand ambassador Micheal Foulk. “I love their beer. I’ve known Bob and Micheal for a very long time, since before they were in this space, so I’ve been coming to Hops and Grain for a very long time. They host a stand-up comedy show here every Thursday.” Ehrmann and Foulk are both comedians that provide comedic entertainment, one of the brewery’s several crowd draws.
They are also one of the stops on the annual self-guided East Austin Studio Tours (E.A.S.T) route, and have local artist’s work hanging on their walls.
Do they truck their beer to stores? “The way it works in Texas, you are either self-distributed or use a distributor.” They use a distributor.
What Garcia likes best about working for the brewery is, “The culture that we have, that is very supporting of our co-workers and our community in which we live.”