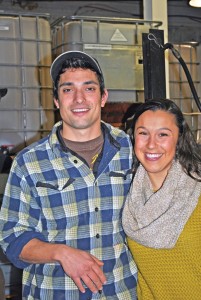 by Katie Navarra
For 10 days in November, Cider Week Hudson Valley celebrated the craft cider industry by connecting “cider makers from New York’s Hudson Valley to buyers from top restaurants, bars, and retail shops across the Hudson Valley region. Through a growing awareness of craft cider, Cider Week helps to bring profitability to local orchards while reviving heirloom apple varieties.”
Events spread throughout the Hudson Valley region from Rhinebeck to Albany, Saratoga Springs to Cold Spring featured tastings, food pairings and even a pressing party to commemorate this fall’s apple harvest.
Located in the heart of Albany’s warehouse district at 929 Broadway, Nine Pin Cider Works organized a public pressing party. Owner Alejandro del Peral advertised an ambitious effort of pressing 80 varieties of apples to create one MONSTER Cider.
Hard cider fans packed the urban farm cidery to sample the start-up’s line of cider. Local politicians including Albany Mayor Kathy Sheehan, and New York State Assemblyman John T. McDonald III joined in the fall harvest celebration.
The pressing party was as much a celebration of the bountiful harvest season as it was an opportunity to enjoy the fledgling business’ success. A few years ago, Alejandro del Peral was apprenticing with a Vermont cidery marveling at the cidery’s struggle to source local, fresh fruit.
“In the back of my mind I was thinking, I grew up in the country’s second largest apple crop located close to an urban hub,” he said, “it was a cider maker’s dream.”
He moved back to New York, perfected his own cider blend and entered the noncommercial cider called Catskill Thunder in the Great Lakes International Cider & Perry Competition, where he won a gold medal. Encouraged by his cider’s success, del Peral, along with the help of his parents, Cosiano and Sonya del Peral, formed Nine Pin Cider Works.
As an intern and later an employee at a Vermont cidery, 28-year-old Alejandro del Peral watched the craft cider company struggle to source fruit. Raised in Ghent on the de Peral family farm, Alejandro was encouraged to develop a love of nature, adventure and fresh food. “Our family has always grown our own food and on a small scale been self-sufficient,” he said, “so I have a passion for supporting a local food system.”
Nearly 90 percent of the apples he uses are from Samascott Orchards in Kinderhook, NY. The orchard offers del Peral 80 varieties of apples to choose from. “Few other orchards offer so many varieties of apples,” he said.
In one year del Peral has produced nearly 40,000 gallons of finished hard cider from New York grown apples.
His commitment to locally sourced fruit resulted in Nine Pin Cider Works being named the first licensed farm cidery in New York State. Legislation passed in 2013 established a new license for farm cideries to increase opportunities for this growing agricultural industry. The new law allows cideries like Nine Pin to operate a tasting room where they are able to sell their product by the pint, enabling them to more immediately reap financial rewards among other benefits.
This season, del Peral estimates he’ll use approximately 1/4 million tons of apples to produce the Nine Pin Signature Style Cider and another 25 to 30 varieties ranging from blueberry and raspberry to ginger and more with select blends only available during the holidays.
For more information visit www.ninepincider.com or call 518-449-9999.