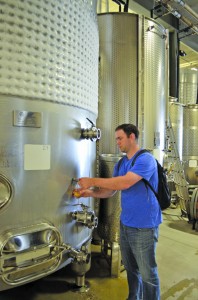 by Sally Colby
From the 1940s through the 1980s, Jack Hauser was the president of Musselman Foods — a household name when it comes to canned apple products. Hauser also grew apples in his own orchards, which were destined to become the source of fruit for Jack’s Hard Cider.
Many of the trees in the 180-acre orchard are still grown the ‘old’ way, without supports and a fruiting wall, while new plantings are grown in single or double rows that will be trained to trellising in a more modern system. The apples are for Jack’s Hard Cider are primarily Rome, which Shane Doughty, director of off-site sales for Jack’s Hard Cider, says is an ideal variety for hard cider. For new plantings, Doughty is pushing for extremely tart apples. “If we can get the tartest apples with the most tannins possible and then blend, we can get the desired flavor,” he said. “A small amount goes a long way.”
Apples are picked at the optimum stage of ripeness and either used immediately or taken to nearby storage facility. The juicing process begins similarly to the process by which fresh apple cider is made. Bins of fresh fruit are dumped into a tray that moves apples for an initial wash, followed by another multi-wash cycle. The clean apples go through a grater, then through a fruit press. Juice is pumped directly into tanks in the cidery. Rice hulls are added during pressing to more effectively move the fruit against the press.
A centripetal pump moves liquid to the tanks through positive displacement. “It’s like the pumps used in pharmaceuticals,” said Stephen Rigby, wine maker for Hauser Estate, which shares space with Jack’s Hard Cider production. “It’s the kind of pump that can be used to move solid material such as crushed fruit. If we wanted to, we could take the apples after they go through the cheese-grater mechanism and pump it into the press without going into the top.”
The material that comes out of the crusher is very dry, Rigby explains, especially since rice hulls have been added. In order for the pump to effectively push the material through the hose and to the press, more liquid is required. When the juice is coming out the press, some of it is re-routed back to the pump to achieve a more liquid flow.
“Cider uses the same fermentation process and principles as wine,” said Rigby. “ It turns into a beer product when you start carbonating and packaging in kegs and cans. Apples that are pressed today can be packaged as cider in 45 or 50 days. Wine doesn’t work like that.
Rigby explains that with wine and cider, it’s a matter of taking juice, adding yeast and fermenting it. “Here we’re taking juice from fruit that comes from right from the vineyard or the orchard,” said Rigby.
Doughty says because they are using fresh apples rather than purchasing juice at a certain pH or sugar level, blends of apples mean a somewhat different product in each batch. “If we manage it in the same way we can get that part consistent,” he said, “but if we have a different raw cider and different processing times, it’s different from a batch that was pressed and filtered immediately. We want consistency from the time fermentation starts to carbonation and then packaging.”
Tanks with glycol cooling systems keep the cider at the optimum temperature during stabilization. Doughty likens that part of the process to taking cider from the roadside stand and storing it in the home refrigerator. “It’s basically the same thing,” he said. “We want to stabilize it — it gets cold, we bring some of the sediment down, and then we start fermentation. The natural yeasts and sugars would start fermenting on their own, but we want to control that. By chilling it at this point, we can stop it from fermenting.”
Doughty says it takes about a week to press and a week to can a batch of hard cider, so the goal is to stagger tank filling so that they don’t have four large tanks of finished product ready for processing all at once.
Although Jacks’ Hard Cider was originally bottled, most is now canned. Because cans must be ordered in large lots, small production runs are bottled and labeled.
“Our-year-round product is canned,” said Doughty. “We feel that it’s better packaging for our ciders, especially those that will be consumed in the next month.”
The canning line is fairly basic — a forklift places pallets of cans above the line, then cans roll down a simple conveyer. “The cans are purged with air, filled, seamed and moved to the six-packer,” said Doughty. “Then they’re rinsed. It’s a fairly simple process.”
Smaller batches of seasonal hard ciders are canned in white cans with a sticker added. Much of the packaging meets the green initiative of the company, with cans that are easy to recycle and a snap-off six-pack holder that can be reused for different cans.
Some of Jack’s limited release products have an alcohol content of 6.9 percent and can’t be sold as hard cider in Pennsylvania through beer distribution, so it’s considered an apple wine — even though it has been processed as cider.
Doughty says that customer recognition of the unique nature of the Jack’s brand has been slow, but now growing. “I almost think we have to tell the customer three times before they get it,” said Doughty, emphasizing Jack’s policy of using only their own fresh fruit. “We’ve been slowly making that point. Hard cider is growing as a category — the big manufacturers helped push the product but it took us small producers with high quality fruit, making a dry cider to have the craft beverage drinker want to drink a hard cider. We’re selling as much as we make.”