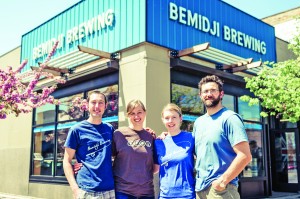 by Emily Enger
When four friends, 30 years old and younger, decide to start their own business, they do it Millennial style: with the Internet.
Tom Hill and Justin Kaney met while attending Bemidji State University for prototype design, but their identical major was not the only interest they shared. It didn’t take long for the two to bond over their interest in home brewing as well. They made plans to one day open a brewery together. Though their post-college careers took them different places, in only three short years they returned to Bemidji, the starting place of their dream, along with their significant others, Megan and Tina.
But how do you begin an endeavor like a brewing business when you’re starting from scratch? Tom went to the Siebel Institute in Chicago for some extended brewing education and Justin, while living in Rhode Island, took business courses. But the two couples had nothing by way of equipment, funds or location. So in November 2011, they took to the World Wide Web to begin a Kickstarter campaign.
It has become more common to see craft startups on Kickstarter.com today, but that was not the case just a few years ago. “We were in the very first wave of breweries trying to secure funding on Kickstarter,” recalled Tom.
And the method they helped trailblaze was quite the success! The friends raised $17,528 via Kickstarter — more than $2,000 beyond what they were asking. “There was never really any lull or even giant spike,” recalled Megan. “The donations just came in a steady increase. I’d say half to 3/4 of our backers were people we didn’t know and anonymous giving.”
Tom credits some of that to location. “Bemidji is a place that likes to support its own,” he said. “They take pride in showing off what’s here.”
But the other piece of their success was a lot of hard work. A good Kickstarter campaign is not easy. In fact, calling it a ‘campaign’ is quite apt. The friends hit the road to host events at pubs and businesses within Bemidji. They handed out free samples and explained their goals like political platforms. This helped keep up momentum and drive people to their site. “It was important for people to meet us,” said Tom. “To give them an assurance that their money was going to real people.” They also brought laptops to each event to show those unfamiliar with Kickstarter how to donate.
And then there were the many prizes and giveaways associated with Kickstarter. “We took the strategy of having both physical gifts and experiences,” explained Megan. The gifts included T-shirts, bottle openers, beer flights and other logo-engraved items. The experiences were rewards for their bigger donors and those took a lot more effort to organize. The friends hosted dinners and a keg tapping party. They also offered to travel to donors’ homes and cabins to pair their ale with a homemade meal.
But the biggest experience was for those donating over $1,000: a ‘Lake Bemidji Brews Cruise’ for the donor plus eight guests. “We wanted the prizes to reflect the location we were at,” explained Megan. The city of Bemidji is named after the lake it borders, which is a tourist hot spot and one of the most popular lake culture destinations in the Land of 10,000 Lakes. So they rented a pontoon from a local business and brought in a friend’s band, who volunteered their time. Live music on a lake with free ale? It’s no surprise they had a couple large donations that qualified for this prize. They ended up hosting two separate Brews Cruises.
The success of their Kickstarter surprised the friends. In hindsight, they actually wish they would have expected more and set higher goals. A fairly recent Kickstarter trend, Megan explained, is to set extended goals. After the initial goal is met, donors are incentivized to meet goal number two by attractive rewards that are not given until the second goal is reached. If they had to do it over, that method is one the friends would take advantage of.
The Kickstarter campaign financed some equipment as well as the gifts and experiences that were hosted. The Bemidji Brewing Company started small, as part of a shared-space kitchen in a local co-op.
Since then, a lot has changed. Once they had a local account purchasing from them, they had enough proof of success to apply for a small business loan. This loan allowed them to lease their current space, which they converted to a production brewery and taproom. Both couples recently married and all four have quit their outside jobs to be fully supported by the brewing business.
And just as the donations steadily increased on their Kickstarter page, requests for their beer have continued, as well. Due to a limited capacity, they have had to turn down more than 50 requests from various places surrounding the Bemidji area. That won’t be the case for long, however, as expansion is one of their current goals. The same determination and innovation that made them young, independent business owners is driving them on to fill all of Bemidji and the surrounding area with their locally-brewed beer.