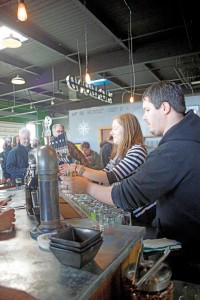 by Tamara Scully
Many craft beverage makers initially start out doing it all themselves. When they need more hands, they find another visionary interested in brewing or distilling and add them to the team. As demand for their product grows, makers need to hire employees and begin delegating duties. Sometimes, they need employees with specialized skills — preferably those who also have knowledge or a passion for craft beverages — to handle tasks they are not trained to do themselves. Legal services, marketing, distribution and accounting are different skill sets from creating beverages.

The craft beverage industry provides employment to a lot of people and only a small percentage of them are brewers. Others operate taprooms or work the front-of-the-house in brewpubs or on farm breweries. Some promote and market the beer. Others plan events, manage the supply chains, handle the legal requirements, control production and pricing, or educate others about craft beverages.
According to the Brewers Association, craft brewers provide over 400,000 FTE (full-time equivalent) hours and the average industry wage in the United States was $43,000 per year – with labor income over $18 million per year, in 2014.
Employment categories for production employees were broken into:
• Brewers
• Brewers assistants
• Packaging and draft line
• Quality assurance/research and development positions
Data from 2009 production shows that among brewpubs with production under 500 U.S. barrels annually, the average is 1.7 employees. This rises to about 5.5 employees at the 1,000-barrel or more production mark. A growth in full time head brewers, as well as full time assistant or shift brewers, lead the way as brewpubs expand to the 1,000 barrel or more mark.
Packing line staffing needs, however, initially decrease as the production rises from below to above over 500 barrels, perhaps attributed to automation on the packing line. As production increases, craft beverage makers are not only focused on brewing and beer production, they are becoming employers in a fuller sense of the word. Beer not only has to be brewed, it has to be sold and that takes a lot of different skills, other than knowing how to brew it.
With over 15 million barrels of craft beer produced in the United States in 2013 and over 2,700 craft breweries in operation, finding employees with the skill, passion and knowledge to promote craft beverages, as well as to make them, package them, distribute them and market them, has lead to a growth of formal educational programs geared to the market, such as the program at Paul Smith’s College.
“A domino effect is actually what is at work when we look at the growth of this industry,” said Professor Joe Conto, Director of Hospitality, Resort and Tourism Management at Paul Smith’s College. They offer a Minor in Craft Beer Studies and Operations, most students in the program are enrolled in the Hospitality and Culinary Management or Entrepreneurial Business Management majors.
“This minor differs from others in the fact that it focuses on the product post-production as opposed to a brewing centered curriculum.” Conto said, although students do participate in brewing and the “mind-blowing amount of science involved.”
Students who participate in formal education related to the craft beverage industry in all its aspects will “have a ‘leg up’ on other graduating students and industry professional who have equal amounts for academic knowledge and general experience, but lack the expertise of this growing aspect of the industry,” Conto said. It would make sense for brewpubs and other craft beer focused establishments to “hire someone who has both a background in the hospitality and culinary field and the world of craft beer.”
Positions advertised currently on craft beverage job boards include head brewers, production coordinators, sales managers, brewpub operations manager and more. Farm-based employment, growing the hops, barley and other grains or ingredients, is also in demand as many craft beverages are based upon the philosophy of local.