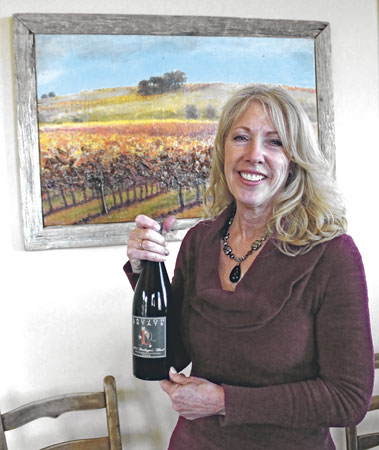 by Karl H. Kazaks
KELSEYVILLE, CA – With the Mendocino Fires complex torching terrain, destroying buildings and forcing evacuations, Lake County California, is once again in the news for being the site of catastrophic fires.
Area residents still remember and can clearly see marks left by the Valley Fire, which struck Lake County during the end of the 2015 growing season and at the time was the third worst fire in California’s recorded history, based on total structures burned (about 2,000).
With these sobering events clearly in mind, we take the opportunity to highlight what makes Lake County an attractive wine-growing region, with a particular emphasis on a specific boutique winery in the Red Hills AVA, Laujor Winery.
Laujor was founded by Cheryl and David Lucido when they bought an overgrown walnut orchard on a hillside overlooking the southern end of Clear Lake. The winery is about halfway between Lower Lake and Kelseyville, in the heart of the Red Hills AVA.
The hills, part of the northern reaches of the Mayacamas Mountain range (which to the south borders the west side of Napa Valley) is so-named because of the noticeably red color of their soils. The soils are primarily volcanic, originating from the volcano Mount Konocti, on the southwest edge of Clear Lake.
Clear Lake is a major geographic feature for both Lake County generally and the Red Hills AVA. It’s the largest freshwater lake in California and acts as a moderating influence on the region, helping to reduce the air temperature quickly as day passes to night.
With warm daytime temperatures and cooler nighttime temperatures throughout the growing season, grapes are better able to synchronously mature their acids and sugars, both in the Red Hills and throughout Lake County.
The vineyards in the Red Hills are high enough to catch westerly breezes from the Pacific during the growing days. The vineyards at Laujor Winery, for example, are at an elevation of 2,300 to 2,400 feet. The Lucidos have planted all red varieties: Cabernet Sauvignon, Petite Sirah, Syrah and Cabernet Franc.
Both Petite Sirah and Cabernet Sauvignon are considered excellent varieties for Lake County because the climate allows the grapes to fully ripen and make concentrated wines.
This is particularly so in the higher elevation locations such as Laujor’s because at higher sites more UV light penetrates the atmosphere and thus results in grape berries with thicker skins, which in turn result in more concentrated wines in the cellar.
That’s something that excites Cheryl, who studied winemaking at UC Davis and has been Laujor’s winemaker from day one. “I love the concentration of fruit in our reds,” she said.
Lucido makes white wines from fruit purchased elsewhere in Lake County, but her focus is her ripe, full-bodied red wines. Lucido makes a Petite Sirah, Syrah, a red blend and two Cabernet Sauvignons, including one, Collie’s Cuvée, named after David’s father.
All of the reds show good color extraction, and a robust fruit profile. Like most Red Hills reds, these are not weak or wimpy wines.
It is this ability of the vineyards in the Red Hills and Lake County to make such wines which explains why wineries headquartered outside of Lake County – including some famous producers from Napa such as Andy Beckstoffer – have vineyards in the area. Many of those vineyard owners ship their harvest out of Lake County to be crushed in other locations.
This is not so at Laujor, which is Lake County through and through. With their pioneering efforts, the Lucidos are continuing a Lake County legacy: prior to Prohibition, Lake County was the largest wine producing county in Northern California.
Once the fires pass and their effects recede into history, those from outside of Lake County will notice the other bright lights in that fine winegrowing region: wineries such as Laujor, who are today creating a legacy for the future.