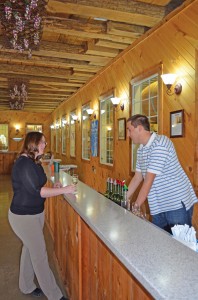 by Sally Colby
When guests drive up the long, winding driveway surrounded by spacious fields and rows of grapevines lining the hillsides, it’s clear that Linganore Winecellars is a serious operation. But according to owner Anthony Aellen, a winery can be serious without being pretentious.
The welcoming building that houses the winery is a faithfully restored 200-year old dairy barn. The tasting room is located in the lower half of that building; the latest in a series of repurposed buildings that include an old chicken coop and a livestock loafing shed.
As guests walk into the big red barn, they’re greeted by the tasting room host. They then walk past the checkout area and racks of wine before reaching the bar. “When people walk in, they aren’t disturbing those who are already tasting,” said Aellen. “There’s no conflicting traffic.” Aellen says the layout of the tasting room and how people are able to move around in it are important, but the way people are treated there is what counts.
“You have to take a look at the room, and look at customer flow and see what’s easiest for the customer,” said Aellen. “As we grew, we went from 700 square feet to 1,000 square feet to 2,000 square feet to 3,500 square feet. This room is a big rectangle, so the tasting bar is long with tasting stations strategically placed. The tasting bar can handle about 100 people comfortably. That allows much better flow.”
Although Aellen likes having the capacity to serve that many guests at once, he says the bar shouldn’t be so long that customer intimacy is lost. “When we’re really busy, we have two people at each station,” he said. “The servers are working with about 10 feet of bar space and 8 or 9 people, which helps keep the personal relationship with the customer.” Linganore has 32 different wines, and typically offers 16 to 18 for sampling.
Linganore Winecellars was started 38 years ago, but Aellen still emphasizes one simple fact: “What we’re selling is something that has been made for 6,000 years,” he said. “We don’t get into the holier-than-thou esoteric language — we just say, ‘this is strawberry wine, or this is cabernet. Do you like it?’”
According to Aellen, wine tasting shouldn’t be complicated, and that tasting — and, ultimately, purchasing — comes down to what people like. “Everyone is a wine connoisseur because it’s all here,” he said, pointing to his palate. “Everybody’s palate is different, and nobody’s palate is wrong. It’s what you like. What you’re doing with wine is what you’re doing with every other food you’ve tasted since you’ve been born — I like this, I don’t like that. People find out what they like by trying different things.”
Aellen points out the importance of making guests feel welcome and not intimidated. “The pretentiousness came from the industry itself,” he said, adding that at its core, wine is nothing more than old fruit juice. “I’ll tell people on the tour that they’re drinking something that’s been made for 6,00 years — how sophisticated does it need to be? The industry has brought it on itself, including down to glasses for white wine versus glasses for red wine, and rigid guidelines on what kind of wine goes with which food.”
When it comes to how customers perceive their experience at the winery, Aellen insists the winery’s philosophy has to come through in how wine is presented and how comfortable the customer feels at the winery. Aellen noted a lot of the industry jargon doesn’t make sense to customers, and insists that wineries should relate to customers in language they’re familiar with. He also noted many grape varieties that would make exceptional wines haven’t been developed simply because people have trouble pronouncing the names. ““Wine has to be approachable,” he said. “People will not re-approach you if they aren’t comfortable. People don’t want to look stupid so they won’t even ask questions.”
In addition to keeping their tasting room open 361 days of the year, Linganore Winecellars holds four weekend festivals that draw from 5,000 to 20,000 guests. “When we do those, we also have a big pavilion where we’re serving,” said Aellen. “While that’s going on, we give guided tours of the winery to groups of 80 at a time. At the end of the tour, guests end up in the tasting room, so we have to be able to handle people coming in at half hour intervals.” Aellen says that only seven wines, all reserves, are served during festivals, so tastings run smoothly and fairly quickly. People have ample time to pick out wines and get through lines at the cash registers before the next group, yet no one feels rushed.
Wines from Linganore Winecellars have garnered 400 medals, but most customers will never know that because Aellen doesn’t display medals in the tasting room. “Medals are a two-edged sword,” he said. “People buy a wine because it has a medal, go home, open it up and say ‘yuck.’ Then they think, ‘that one won the medal, so the rest of them must be worse.’ You’ve just shot yourself in the foot, and they won’t taste any other of your products.”
Although Aellen is proud of the medals awarded to Linganore wines, he says that a medal only shows him ‘where I sit in in that group of wines that was presented on that day with that set of judges.’ “What are you really doing other than building your own ego? ” he said. “Your customers are your ultimate judges, and if you don’t win their support, you’re out of business.”
Visit Linganore Winecellars on line at www.linganorewines.com.