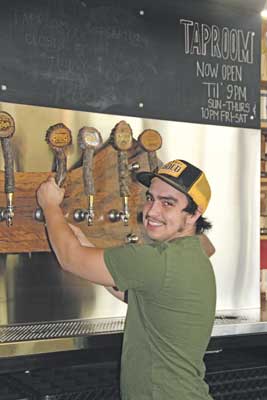 by Laura Rodley
Inside Del Valle, Texas is a brewery devoted to the old European way of brewing beer and preserving its own landscape. Though Live Oak Brewing Company’s original brewery started in 1997 on East 5th Street in Austin, due to Texas law, it was illegal to sell beer in a glass to customers, or any retail product at the brewery.
“The only way we could sell it was to retailers or to distributors or to bars and restaurants,” said Meg Ellis, taproom manager. In 2015, the laws changed and Live Oak Brewing Company’s owner, Chip McElroy, decided to change with them: he seized the opportunity to create a European beer drinking experience for his customers.
They broke ground on their current 22-acre site in 2015, on land that rolls all the way to the Colorado River. Their new taproom and brewery was up and running by December of that year.
“Our old facility was only beer distribution. There was no space to can or bottle anything for retail sales,” said Ellis. They now have a bottling facility. “It has basically tripled our production line.”
Now their 40-foot-tall, 20,000 square foot brewery has four brite tanks and nine giant fermentation tanks.
Some of their fermentation tanks were custom made and fabricated for them in New York and hold 8,000 gallons each. The tanks arrived at the brewery in spring 2017.
The brewery makes 15,000 barrels of beer a year. They employ 35 people.
Ryan Monahan of Austin, Texas is one of their brewers. He has worked for Live Oak Brewing Co. for four years and, after training, has been a brewer for one year. He enjoys “making my most favorite beers in the world.” His top favorite is their top seller, Hefeweizen, a Bavarian style beer which incorporates the flavors of vanilla, clove and banana. “It doesn’t get much better than that for that style of beer,” he said.
Monahan added, “We keep it old school. There are not a lot of American breweries doing that now,” as so many craft breweries spring up. “We’re brewing the same stuff brewers have been brewing for hundreds of years in Europe. You don’t change that. That’s why they’ve lasted this long.”
Not all of a brewer’s job is creating beer. Part of Monahan’s job is cleaning the hoses.
They purchase their wheat malt from Bamberg, Germany.
They also make Smoak Toberfest, inspired by the smoked lagers of Bamberg, with a taste of beechwood smoke, plus Munich and Vienna malts.
Their new canning facility, housed inside the brewery, is able to produce 4,200 cans an hour. The cans are put into six pack fridge boxes and distributed throughout Austin, to local supermarkets, to San Antonio and San Marcos. They kept all of their former retail relationships and continue to sell beer to them.
The working environment inside the brewery is upbeat, lively and friendly. “I like that we make lager,” said Senior Cellarman Brad Janowski.
“We’re different from other breweries in town. We focus on the traditional, recreating a European beer experience,” said Ellis. Inside their taproom, with floor to ceiling windows, the beer taps and bar are made of live oak wood.
Outside, their beer garden was created around the pre-existing live oak trees. The whole facility was built around the trees, saving what was already on the property. There are more than 40 picnic tables set outside so that “people can gather, hang out and have conversations. People can connect over their beer,” said Ellis. They hold parties, weddings and functions.
The Black Forest food truck is permanently set on the grounds at Live Oak.
Consistently enhancing their customer’s drinking experience, just this past summer, they opened the nine-hole course of their popular Live Oak Disc Golf, utilizing their open outdoor space. In keeping with maintaining a healthy ecosystem, they ask that no one “approach, feed, harm, kill or remove any wildlife on our property” and encountering a rattlesnake while playing is quite possible. They had their first Disc Golf tournament in October. And paramount to player’s enjoyment, they can drink a can of their favorite cold beer while playing. For more information, visit www.liveoakbrewing.com.