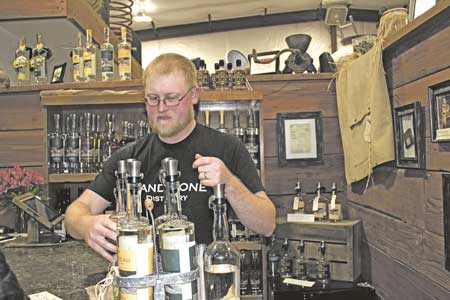 by Catie Joyce-Bulay
“I’ve been making whiskeys for the past 13 years and legal for the past three.” This is how John Bourdon likes to open his tours of Sandstone Distillery. The natural born public speaker then goes into the story of getting a registered letter from the Department of Treasury informing him that they had recently conducted a raid of the store he bought his still from, obtaining all customer records. There was a $10,000 penalty for distilling, along with five years in prison for the felony charge. Bourdon, a former truck driver and hobby distiller, hadn’t considered the small quantities he made for himself and friends and family as illegal. “One thing led to another and we got legal,” he said.
For the four-generation business, that opened in 2014 in rural Washington near Olympia, operating the distillery as a family made sense. “We have been doing business as a family in one form or another for nearly 30 years, so the distillery was a natural extension of both our family ethos of working hard together, and John and Justin’s passion for craft spirits,” said John’s wife Jennifer.
Bourdon and his son Justin designed each of their stills working with re-purposed vessels from a variety of sources, including metal storage containers and soup kettles once used on a navy ship in the 1970s. They worked in conjunction with fabricators for the retrofits and did the majority of the finishing work themselves, continuing to make improvements.
“When you’re a distiller you become kind of a copper nerd,” John said, showing off a ceiling-height milk jug he recently procured. The giant copper jug was used in making condensed milk in the 1960s, then moved on to a mint factory and will soon be in production at the distillery.
Sandstone produces gin, a licorice-forward black gin and a vodka from wheat and malted barley, which was a 2016 Silver Medalist with the American Craft Spirits Association, and 2016 Bronze Medalist at the Seattle International Spirits Awards. They also make a line of vapor-infused flavored vodkas, where the spirit vapors pass through a botanicals bag in the distillation process to impart flavors of rosemary, lemon-ginger, garlic or chive.
Sandstone also produces whiskeys, including Stone Carver White Whiskey, Andrew’s Hammer, and Stone Carver Bacon Whiskey. First made for the Seattle Bourbon and Bacon Festival, the bacon whiskey is created with real bacon that they soak. The original batch used a pricey store-bought brand, but they realized creating more would be cost prohibitive. Their solution was to source the bacon from a farmer down the road, who feeds his pigs with their spent grains.
Their Stone Carver Barrel Aged Whiskey is released in single-barrel batches, which Bourdon said each have their own flavor characteristics, similar to a wine vintage. Bourdon characterizes their fall 2017 release, The Four Horsemen, as resonating with “rich, mellow grain flavors, smooth caramel and vanilla mid-tones, and a long, well balanced finish.”
The Bourdon’s started working with Washington State University (WSU) in 2016 on testing new barley varieties grown in Western Washington. WSU gave them nine different barley varietals. They then ground, mashed and distilled them into single malt whiskeys, which were recently sent off to get tested for flavor profiles, and will eventually be available for sale.
Bourdon uses different wheat varieties as well, which he said impart different flavors. “Grains will taste different from different regions, West and East, even the coast side will taste different than it does here.” For example, soft white wheat produces a sweeter vodka, hard red wheat is more peppery, which they also use in their bourbon. They have distilled with yellow corn and would like to experiment with the flavor variations in white and red corn.
All of the grains they use are grown in Washington, which exceeds the state standard of 51 percent Washington-grown ingredients required for the craft distiller’s license. Bourdon likes to get wheat directly from the farmer so he knows the practices they use and can support local growers.
In addition to spirits, Jennifer heads up a line of shrubs, a non-alcoholic vinegar-based flavored syrup, which the family runs as a separate LLC, since combining a spirits business and food business didn’t make sense in regards to licensing, bonding and insurance. Oh!Shrubs is sold in Sandstone’s tasting room and flavors such as cranberry, blueberry, apple-cinnamon and carrot-ginger complement the spirits in mixed drinks.
Sandstone, which produced 2,100 barrels in 2017 and is on-pace for 5,000 barrels this year, also offers a line of ready-made cocktails using the spirits and the shrubs. “We often have private events at the distillery, and found that people loved the complete cocktails, but didn’t want to mess with the components with which to make them at home,” said Jennifer. “So, we started our Ready-to-Pour Cocktail line, and wow, have they ever been well received, not only here at the distillery, but at our retail locations.”
In addition to hosting private events, the distillery also gives daily tours of their off-the-beaten-path facility, often seeing 20 to 30 guests in the course of a day, and offers a distiller-for-a-day program. “The Distiller-for-a-Day came about because we recognized there are many fledgling (and illegal) home distillers out there who want to know the whole of the process and how to legitimize,” said Jennifer. “They start their day with us at 0600 and finish 10 to 12 hours later. Most find that kind of time commitment daunting, but that’s actually several hours short of our real-world…It has given many people who think they want to explore this enterprise an up-close and personal opportunity to see the entire operational cycle first-hand.”
The family has been searching for a larger space for both Sandstone and Oh!Shrubs for the past two years and will soon announce their new location.