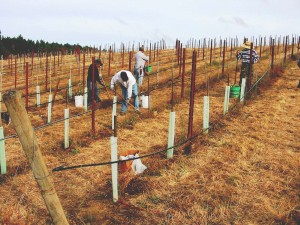 by Sally Colby
When commercial photographer Jeff Hansen was sent to Napa Valley to photograph a winery, he fell in love with the wine industry. Four years later, he started to explore the idea of establishing a vineyard and moved to Napa Valley to work in a winery. After total immersion in the process — from growing grapes to making and marketing wine — Hansen was ready to strike out on his own.