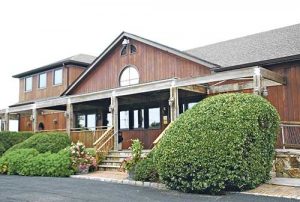 by Jane Primerano
Lots of wine, fruit wine and dandelion wine is made in basements around New York City.
Some was made by Joseph J. Macari Sr. with his father and grandfather in Corona, Queens in the 1930s and 40s.
While not every boy who helped the older generation dreamed of being a winemaker, Macari did. His first step was buying a 500-acre potato farm on Long Island’s North Fork in the 1960’s, said his granddaughter, Gabriella Macari. After his career in real estate, Macari planted the vines on 180-acres in 1995 and opened the tasting room in 1998.
Macari is “100 percent family,” Gabriella said. Her parents, Joseph and Alexandria, herself and her three brothers all work at the vineyard.
Joseph J. Macari Jr. developed a complex composting program after studying biodynamic viticulture. He keeps a herd of Longhorn cattle and a field devoted only to compost, the winery website states.
Alexandria is managing director and manages all inventory.
Gabriella’s brother, Joseph M. Macari, is vineyard manager, and Gabriella is manager of education, distribution and marketing.
The winemaker is Kelly Koch.
Macari’s has two tasting room locations. The main tasting room is in Mattituck on Bergen Road while the other is in Cutchogue. The Mattituck location is open seven days a week year-round, according to Nicole Nettles, the wine club manager. The Cutchogue room is open April through October.
Macari Vineyard and Winery host events at their tasting rooms, mostly corporate luncheons and small dinners. “We like to leave 11 a.m. to 6 p.m. for tastings and try not to close the rooms too often,” Gabriella said.
The 20 full-time employees are augmented during harvest season, she noted.
The wine club has three levels — four, six and 12 bottles. All wines are sent out four times a year, Gabriella explained.
“We have strong support from the local community, but we do ship wines for the wine club to places we are allowed to ship to,” she added.
The Bergen Red, a Bordeaux-type, and the Sauvignon Blanc are two of the most popular wines, she said.
Nettles noted the Rosè is making a comeback in summer. “Ours is refreshing. People thought Rosè is sweet so they stayed away. But they try ours and find it can stand up to food.”
The featured wines on the website, including Chardonney Estate, Cabernet Franc Reserve and Sparkling Curvee Gabriella are a long way from dandelion wine in a Corona basement, but the Macaris are still the hard-working winemakers of four generations ago.
For more information, visit www.macariwines.com.