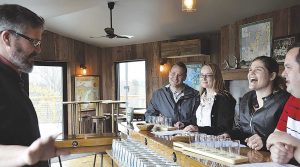 Couple Transforms Dilapidated Home into Spectacular Cider House
by Samantha Graves
When Mark and Madelynn Korzon opened a cider house in Suttons Bay, MI last fall, they had put years of experience running a successful landscape design business behind them. Mark studied horticulture at Michigan State University and Madelynn, a nurse, began taking plant ID classes at the university, after meeting Mark.
“We wanted to speak Latin together,” said Madelynn smiling.
The duo made significant sacrifices over the past several years to see the dream of operating a cider house in northern Michigan come to fruition. A tight budget compounded by renovations necessary to convert an old, dilapidated residence into a beautiful tasting room, meant giving up on some features of production like bottling and a conveyer system, but there is certainly no compromise from these two on quality.
“I think we’re doing everything right,” commented Mark. “We’re being welcoming hosts, and we’re trying really hard to instill that in our new people. We both love people. So I think we’re doing everything right in terms of taking care of people.”
That same level of dedication spills over to a unique line of quality ciders.
Chris Guest, winemaker for neighboring Willow Vineyard was hired by the Korzons to produce their cider. Guest said the transition to apples has been enjoyable, “I like the quick production turnaround. You have a direction you’re going in and you get there in a matter of weeks to a couple of months. That gives you a certain pace that’s different from wine making.”
Guest’s focus, along with the Korzons’ interest in native plants, means you’ll find flavor profiles at Suttons Bay Ciders you might not find anywhere else. Recently, Guest fermented a cider containing staghorn sumac. The result is a refreshing, lemony, dry cider gaining quick popularity among test audiences.
“If you want to make a wine, there are ways you can adjust the alcohol content by adding a fermentable sugar,” Guest said. The same is true of cider. Inspired by Mark’s interest in sugaring, Guest along with assistant cidermaker, Todd Morgan, created a cider infused with maple syrup, one form of fermentable sugar available in abundance on the 10-acre property. The resulting Sapwood affords a subtle sweetness to complement the dry hard cider base.
“We want this place to represent northern Michigan,” said Mark of the use of plants like staghorn sumac or maple syrup. “Be proud of where you’re at and true to who you are.”
The story of Suttons Bay Ciders is one of inventiveness with a twist of fate. The Korzons owned a successful landscape design firm for decades outside of Detroit, MI with clients ranging from auto-executives out of the Motor City to wealthy clients in Ann Arbor. And as it turns out, the same man who inspired Korzon to get into landscape design is the father of John Crampton, creator of Willow Vineyard, a stone’s throw from the new cider house.
“I knew John from downstate. And Chris, too,” explained Mark. “We went to the same grade school, so that’s part of the story.” He went on to explain that the cider and wine making community was instrumental in keeping things going over the long Michigan winter. “That’s been great. We’re not a part of the wine tour circuit, but the vineyards and cider places send people our way.”
Mark said people stopping in to the cider house are unlike the typical wine or craft beer crowds, “I’m seeing a lot of younger people who know cider. And I’m finding that people who don’t like beer so much, really like cider. A lot of people are just discovering it and are liking it.”
Mark said those new to ciders often come with the assumption it’s the next new thing, “that’s surprising.” Madelynn said part of the education is helping people become familiar with cider making as a long-standing craft in both the United States and abroad.
The Korzons are excited to see older, successful cider varieties, popular prior to the commercialization of apples, come back into the spotlight — specifically, the Winesap apple.
In addition to Winesap, the Korzons have planted two acres of antique apples spanning 12 varieties, including some popular American varieties like the Roxbury Russet and Wickson Crab, along with some popular English varieties including Kingston Black and Yarlington Mill.
Speaking of making the old new again, the couple didn’t buy a traditional farm on which to launch their cider-making business.
“It was a house with a lot of problems,” explained Mark, “but when we looked at it, we thought we have to make this work.” Agents representing the house called it a total ‘tear-down’ and it had sat on the market for six years before the Korzons discovered it.
“We put an offer in that week,” said Madelynn.
Rather than tear down the house, the Korzons, with their background in design, re-purposed the raised ranch into a tasting room and cider-making operation with a sweeping 180-degree, unencumbered view of West Grand Traverse Bay. The process wasn’t easy.
”It was a stressful three years,” commented Mark. “I was living up here working on (the tasting room) and Madelynn was downstate and it was like we were dating again.”
Once the Korzons’ youngest daughter graduated from college, Madelynn transferred to Munson Medical Center in Traverse City and the couple was reunited.
And if the cider alone doesn’t pull you in, the warmth and hospitality, coupled with one of the most impressive views around, certainly will.