Managing the other vineyard crop 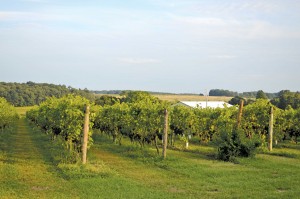 by Sally Colby
In many vineyards, grapes aren’t the only crop to manage. Cover crops planted between the rows, and in some cases in the rows, serve a purpose. Dr. Tony Wolf, viticulture professor at Virginia Tech, says that under-trellis crops help restrict vine vigor, but can result in reduced nitrogen or competition for nitrogen.

“There are no free lunches in grape-growing and using cover crops,” said Wolf, “we get some of the benefits we’re looking for in terms of canopy management and suppression of vine growth in all but the wettest years, but there are downsides.”
Wolf says in some cases, using a cover crop results in low nitrogen levels in the vine. “There are two ramifications for that: one is that overall, the vines’ nitrogen status might be depressed to a point where it has a negative impact on the capacity of the vine,” he explained. “Vine size goes down and consequently, yields go down over time. In the shorter term there’s reduction in yeast assimilable nitrogen level (YAN) in the fruit of vines that are grown with companion crops — cover crops not just between the rows but also under the trellis.”
The consequences of low YAN level in the must or in the berries can range from no ill effects to some serious defects in the wine if musts are not augmented with diammonium phosphate or other yeast nutrients. Wolf says that typically, hydrogen sulfide mercaptan development — sulfurous compounds that smell like rotten eggs, onions or cabbage — lead to some of the off-odors that occur when winemakers run into problems with sluggish fermentations.
“There are two aspects of looking at nitrogen work,” said Wolf, “how can we use cover crops to reduce vine vigor, but do it in a way that we aren’t jeopardizing the overall welfare of the vine by depressing nitrogen levels in too much in the vine or in the must or berries?”
Wolf says there is evidence to show that naturally occurring amino acids synthesized in the berries are superior to synthetic forms of nitrogen that may be added in the fermentation in terms of overall aroma and flavor complexes in the fruit.
Label constraints, which aren’t as significant in the United States as in Europe, allow the addition of up to 200 mg of nitrogen/liter. “If you’re very low in yeast assimilable nitrogen, that may not bring it up enough to what is optimal,” said Wolf.
In systems that establish perennial grasses under the trellises, nitrogen is not being added. “Those grasses are sequestering quite a bit of nitrogen that is available,” he said, “and even though we aren’t removing the grass from the vineyard, we are tying up quite a bit of nitrogen that might otherwise be available for the grapevines.”
Wolf and a graduate student conducted research to determine the optimum time for annual nitrogen application that would benefit the cover crop while maintaining adequate vine and must levels of nitrogen. Another research objective was to determine if fertilization methods using different forms of nitrogen and various timings would affect the amino acid profiles of grapes. The ultimate goal was to determine the sensory impact of wines resulting from these vines.
Three grape varieties, including Sauvignon Blanc, Merlot and Petit Manseng, were selected for the trial. Wolf noted that the selected varieties had different flavor and aroma profiles.
Wolf says in the Sauvignon Blanc vineyard, the vines were 12 years old when the research was started. “At this particular vineyard, YAN was quite low — in the sub 100 mg/liter range; year in, year out,” he said. “The winemaker was having to supplement the musts on a regular basis.” The nitrogen treatments involved both a low and high rate of calcium nitrate applied to the soil. The low rate was about 30 pounds/acre applied once; the high rate was double that amount, applied in a split application. In addition, a foliar urea spray was applied weekly for eight weeks at a rate equal to the low rate of soil-applied calcium nitrate.
A cover crop test was conducted at the Virginia Tech’s Petit Manseng vineyard. The study included two controls – one cover crop control and an herbicide strip control with more conventional floor management strategy using an inter-row cover crop and herbicide strip under the trellis. Pre-veraison foliar and post veraison urea was applied to the cover crop. “The goal was to look at the timing and the foliar applications,” said Wolf, “we wanted to target the fruit to see what happened.”
The third vineyard, planted in Merlot, involved several forms of nitrogen applications including compost, clover with compost, and calcium nitrate applied to soil at various rates. Wolf noted that the red clover that was originally planted failed to thrive and was replace with crimson clover, which did much better.
Wolf says that one goal of the research was to determine if any of the nitrogen treatments interfered with vine development or berry maturation. “We have heard from wine makers that they’re leery about having nitrogen applied any time around veraison or leading up to harvest,” he said. “There is good evidence that if you increase the nitrogen level too much in berries, you can increase yeast assimilable nitrogen in berries, and that can lead to increased incidence of botrytis in the fruit. That’s one caveat, and with late-season nitrogen applications, we should consider that.”
An interesting finding was that the clover and high compost rate increased Merlot harvest weights significantly. In primary fruit chemistry such as brix, in cover crop control versus herbicide control, there was a one degree increase in brix where cover crops were used under the trellis. “Conversely, we saw a degree decrease in brix with herbicides,” said Wolf. “We found that foliar nitrogen applications increase YAN levels, but soil applications worked as well.”
Wolf noted that amino acids are receiving more recognition as having an impact on flavor and aroma compounds in fruit. “The treatment that had the greatest impact on amino acid composition of the fruit was the foliar applications of urea,” he said. “It was interesting that we were getting this significant effect with foliar application.”