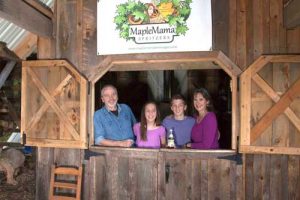 by Laura Rodley
There’s a new buzz word in the health food market and that is MapleMama. MapleMama Craft Maple Spritzers are easy to hold in your hand, are only 70 calories, and contain their signature bite that stimulates the wow factor.
“I like it best when people make ‘the face’; their eyes open wide and they say ‘wow’. I love that,” said founder Joe Laur of Wendell, MA.
The artwork on the bottle outpunches the other artwork on bottles sitting beside it in the cooler. It features a long-haired woman sitting high in the crown of a maple tree, holding the inner light of the maple — its sap — caught in a large teardrop shape in her hands. This was designed by the artist who creates artwork for Celestial Seasonings.
“It is the goddess in the maple tree. We really like her,” said Laur.
There are 54 healthful antioxidants in each MamaMaple spritzer. The antioxidants already occur naturally in maple sap, as well as minerals. The evaporation process creates more of them, including a polyphenol antioxidant called “quebecol”, in honor of the province of Quebec; similar polyphenol antioxidants are also found in blackberries.
The plentitude of antioxidants in maple sap has been proven by researchers from a study released by the University of Rhode Island in 2011, headed by lead scientist Dr. Navindra Seeram.
Laur had been producing maple syrup for the past 15 years as a hobby, 40 gallons a year. He had been working as a consultant — and still does a little — as a “turn-around artist for non-profits” to get their businesses back up on their feet, and he always wanted to start his own business. Two years ago, he conceptualized the logistics of MapleMama, and launched their first spritzers in May of 2016.
“My wife (Sara) and I have twins (Sam and Maya), who are almost 15. We wanted to give them a tasty soft drink but something healthy. We added maple syrup to sparking water and started experimenting with lime, fresh mint — the kids liked that one, crushing their own fresh mint — going on to try cranberry, almond and hazelnut.”
The idea and taste took root. When the kids were little, they had set up a lemonade stand on the common during Wendell Old Home Days, selling their household’s maple syrup spritzers. “All of a sudden, they had a line five to six people deep, more than anybody else on the common, and the people came back for more,” said Laur.
He knew he had a niche market, and when he was ready to venture further, he got advice from people in the beverage business, who forecasted that there was, “Pretty much a 99 percent failure rate, but if you want to try it, go ahead.” And he did.
They conducted taste-testings in local stores and Whole Foods Markets and at parties.
Vanilla came in first, with cold brew coffee coming in second. Holding onto the feedback as gospel, they sell those flavors in 70 local stores in Massachusetts, Vermont and New Hampshire.
For each batch of 500 cases, he uses 65 gallons of syrup. Last May, they produced 280 cases, 140 of each flavor, and sold out. They produced 500 cases of MapleMama Cold Brew Coffee flavor in August and 500 cases of vanilla flavor in September, creating velocity in the business.
Over the years, they have developed the flavors, and added a fruit acid. Because people have asked for it, they are considering adding the original maple spritzer flavor. He came across the cold coffee flavor by throwing cold coffee into the mix on a whim, with superlative results.
“We have a long way to go. We spent $80,000 on the business and have $20,000 in revenues, but it’s growing. If we had launched in January, it maybe would have been $50,000 in revenues. Once we get up to production and higher volumes,” he said, the numbers will follow.
Potential growth and profit partially depends on whether he does distribution, or has someone else do it for them. At the moment, he self-distributes and uses a distributor. He talked to a national distributor recently. His office is in Wendell, but bottles the product at Ginseng UP Corporation in Worcester.
He’d like to produce a mint maple spritzer, but the mint can be very tricky, and can taste great to one person, but not the next.
He would also like to buy his maple syrup from local maple syrup producers, but he hasn’t found an organic maple syrup producer producing in large enough quantities in Massachusetts for his needs. Therefore, he buys organic maple syrup from producers in northern Vermont and Quebec.
For more information email info@maplemamabeverages.com or visit http://maplemamabeverages.com