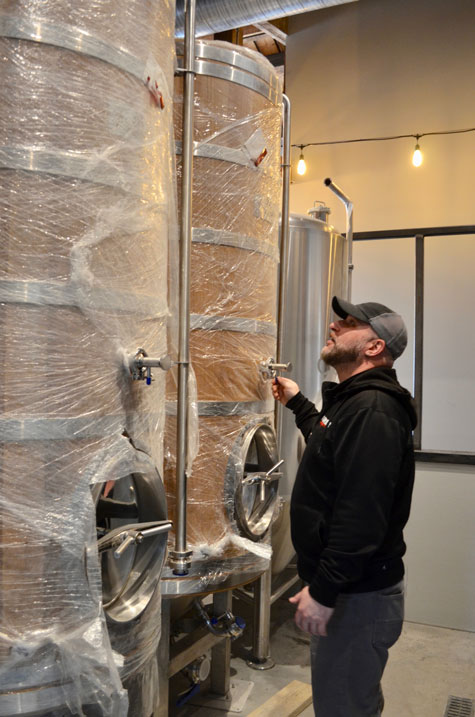 Brewery design includes tanks in an isolated room for Brett and other strains.

The Leedy family isn’t new to the business of serving people. Brothers Wade and Drew Leedy are third generation owners of the popular Tommy’s Pizza on a busy corner in Gettysburg, PA.

About five years ago, the Leedys started thinking about opening a brewery in town. One option was restructuring the existing restaurant, but they had their eyes on a vacant building within minutes of Tommy’s. Wade and Drew had looked at the property several years ago, but the property was zoned residential – even though the property had always been used for commercial purposes.

“We talked with a municipal lawyer and found we’d have had to spend a lot of money, and there was no guarantee we’d get a zoning change so we backed off,” said Wade. “The owner said there were interested buyers, but no one would buy it because of the zoning.”

The borough agreed to work with the owner and made plans to rezone the area. The Leedys put a contract on the property pending the zoning change. After the purchase was finalized in May 2018, the brothers started working with an architect. Armed with some conceptual drawings from the same architect they consulted when they looked at the property three years ago, Wade and Drew finalized the design and began the process of converting the former auto parts store to Fourscore Beer Co.

“This place was bad,” said Wade, adding that they had a little more than 4,000 square feet of space to work with. “They tore up the entire floor – it had been built and added onto, and the floors were different levels. We had to break the concrete out and put new floor in all around. It made more sense to put new floor in than to try to make the old floor work. We kept the exterior, changed the windows, tore the back roof off and raised the roof.”

When faced with innumerable choices for interior design, the only limiting factors were the size and shape. The interior was completely gutted, and Wade’s wife Jodi said although it was a lengthy task, it was exciting to see what was underneath.

During demolition, two drop ceiling were removed, revealing aged wooden beams from the original building. Jodi said once demolition started and the bones of the building were more obvious, it clearly lent itself to a modern, industrial look with wood, metal, concrete and brick components. Another discovery was an old yellow pine door, which the Leedys had restored and customized.

Renovations included removing the old, uneven floor and replacing it with an all new concrete floor in keeping with the industrial look. Large windows make the brew system visible from the pub area.
Photos by Sally Colby

A 35-foot concrete bar complements the industrial look. The interior will seat about 75 patrons, with two long community tables near the bar to create a natural gathering place. Round tables will fill the rest of the space. Jodi said the architect used a computer design that allowed them to experiment with furniture placement that would best fit the space.

Large windows that open to the outside create a European ambience, and most of the inner workings of the brewery are visible from the pub area. The bar will feature 14 taps, and Fourscore will also fill crowlers and sell beer in cans. A modern kitchen was included in the renovation plan, and Fourscore plans to offer light fare such as appetizers, sandwiches and salads.

The brewpub is close to downtown Gettysburg, but parking is limited. The Leedys worked with Gettysburg Hospital, their neighbor across the street, and are grateful for permission to use a hospital parking lot after certain hours.

The Leedys brought experienced brewer Ben Little on board as head brewer. Little designed a seven bbl brewhouse and a mash tun with 10 bbl capacity, and has been working on recipes for about two years. He’ll be ready to brew once everything is finalized. “The equipment is a showcase piece,” he said. “We want to make sure that from the taproom, the space [in the brewery] feels like it’s part of the whole.”

A row of custom-made American oak tanks in a separate room will be used for Brett fermentations. “It typically isn’t an issue if you keep good sanitation,” said Little, explaining why he wants to isolate certain tanks. “There’s glass (to keep the room isolated) and if the door is closed, there shouldn’t be any problems. I also have a dedicated brite tank in here.” This is where Little will incorporate fruit from local orchards and take advantage of natural bacteria on that fruit.

“We’re going to try to make something for everybody,” said Little, describing brew options. “There’s a malt house just outside of Philadelphia we’re going to purchase from, and we’re going to try as much as we can to use local materials. We’re using coffee from Ragged Edge, a local coffeehouse. Whatever fits the beer, we’ll use the right ingredients.”

Once the final touches are complete, it’s a matter of timing to opening day countdown. “When we get final approval from the state, we have to open within ten days,” said Drew. “If we don’t open within ten days, we get kicked back to another timeframe and the inspectors have to come back again. We’d rather not have that happen.”